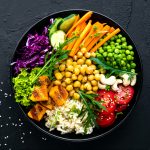 (NaturalHealth365)  Vegetarian and vegan lifestyles have grown increasingly popular as people tout the associated health benefits.  Still, regardless of the data, many people can’t turn away from their carnivorous nature.  The numbers don’t lie, though.

There does seem to be some merit to eating plant-based foods.  Lower risk of heart disease, high blood pressure, diabetes, and some cancers are just a few of the perks.  But even that isn’t enough to convince many to make a move to eating less meat.  The question is, should they have to?  When it comes to meat consumption, do you really have to totally eliminate it to reap the benefits of a “meat-free” diet?

Not necessarily, according to a recent UK study.  It seems that even scaling back your meat consumption can be quite good for you.

Researchers from the University of Oxford, UK, looked into the relationship between a person’s risk of cancer and diet.  The study involved collecting data from 472,337 British adults recruited from 2006 through 2010 to the UK Biobank and analyzing it to identify the correlation, if any.  The participants were between the ages of 40 and 70 and were cancer-free at the time they were recruited.

The participants were then split into four groups according to information gleaned from dietary questions they answered when they were recruited:

The study had some pretty impressive results.  Regarding the overall cancer risk, compared to the participants who consumed meat more than five times a week, it showed:

They also examined the incidence of specific cancers and correlated them to participants’ diets.  Compared to the group that consumed meat more than five times a week:

One thing should be made very clear: the researchers probably did not look at the quality of the meat consumed.  Simply put, most commercially produced meat products are loaded with unwanted chemicals … including synthetic hormones and antibiotics.  This kind of meat is highly toxic and increases the risk of many dis-eases.

Look at what you are eating daily and find ways to cut back on the meat while bulking up on the organic veggies and fruits.  If you do consume meat (or fish) … be sure it’s 100% grass-fed or wild.  Remember, quality does matter!

After all, we’re talking about taking better care of your health.  And, you’re worth it.