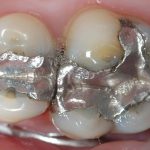 (Naturalhealth365) Many integrative healthcare providers describe chronic exposure to mercury as a “biochemical train wreck” and an “underreported epidemic.” To find the primary source of low-level mercury poisoning, many of us need look no further than our own dental work.

“Silver” dental fillings, used on almost half of all dental restorations in the United States, contain 45 to 55 percent mercury – and the simple acts of chewing and drinking hot liquids can cause the release of harmful mercury vapors.

Accumulating in the brain, kidneys, liver, lungs and gastrointestinal tract, mercury jeopardizes human health in literally dozens of ways. The symptoms of mercury poisoning listed below range in severity from merely annoying to potentially life threatening. But be advised: as shocking as it seems, this overwhelming litany of harm is just a partial list.

Frightening fact about mercury poisoning: There is no ‘safe level’ of exposure

According to the World Health Organization, mercury may have no threshold below which some adverse effects do not appear. (In other words, no level of exposure to mercury is safe!)

Then, why doesn’t everyone suffer from symptoms of mercury exposure?

According to biological dentist Tom McGuire, DDS – an authority on mercury exposure and detoxification – the number and severity of symptoms are influenced by a variety of factors, including your general state of immune health, the number of mercury dental amalgams fillings you have, and your amount of mercury exposure over time. Genetics, diet, lifestyle and environment all can play a role as well.

According to The International Academy of Oral Medicine and Toxicology (IAOMT), chronic mercury exposure causes severe oxidative stress and impairs the function of the mitochondria – the powerhouses of the cells. It also interferes with detoxification by depleting levels of glutathione, the body’s master antioxidant.

The toll from chronic exposure can express itself in a variety of ways. (let’s take a closer look)

According to the IAOMT, mercury exposure can cause a “baker’s dozen” (more or less) of truly disturbing psychological symptoms – including aggression, suicidal ideation, fits of rage, mood swings and manic depression. More low-level, but still troubling, are symptoms of free-floating anxiety, confusion, fatigue, lethargy, depression, insomnia, shyness and agitation.

Of course, mercury – a known neurotoxin – is also linked to cognitive problems such as learning disorders, short-term memory loss and attention deficit disorder. It is also associated with autism spectrum disorder – rates of which have skyrocketed in recent years.

Mercury disrupts the intestinal flora of the gut microbiome, the community of beneficial bacteria that helps to regulate health. This can result in digestive complaints such as diarrhea, constipation, loss of appetite and weight loss.

Other GI symptoms from low-level mercury poisoning include nausea, vomiting and heartburn.

Exposure to mercury through dental amalgam fillings can also impair our precious ability to breathe freely – and cause asthma, allergies, bronchitis, emphysema, chest congestion, shortness of breath and shallow respiration.

Increased inflammation due to mercury exposure can cause muscle cramps, aching in joints, muscle weakness and muscle stiffness.

Mercury can cause hearing problems such as hearing loss or tinnitus. Visual disturbances – including tunnel vision, myopia and macular degeneration – can occur, as can loss of the sense of smell and reduced ability to taste.

These can include bone loss in the jaw, a burning sensation in the throat, gingivitis, (gum disease) leukoplakia (white patches on the throat or tongue) metallic taste in the mouth, sore throat, bad breath, oral lichen planus and canker sores.

And, the adverse effects of mercury aren’t limited to the mouth and throat.

According to Dr. McGuire, mercury poisoning can significantly impair the immune system, raising susceptibility to disease and causing autoimmune disorders.

Dr. McGuire reports that mercury is associated with neurodegenerative conditions such as Alzheimer’s disease, Parkinson’s disease and dementia – along with amyotrophic lateral sclerosis (ALS), multiple sclerosis, lupus and arthritis. Mercury can also raise risk of type 2 diabetes – along with kidney and liver disease.

Unsurprisingly, mercury exposure may be the culprit in cases of hormonal dysfunction and thyroid disease. Exposure is also linked to an increased risk of breast and lung cancer.

Skin problems – such as eczema and psoriasis – have also been reported, along with hair loss, excessive blushing and excessive perspiration (hyperhidrosis).

Finally, the IAOMT notes that chronic mercury exposure can cause antibiotic resistance – currently described by the World Health Organization as a global public health crisis.

Safe and effective detoxification is a “must”

Dr. McGuire warns that if you had – or have – mercury amalgam fillings, it is likely that you are mercury toxic to some degree. It is important, says Dr. McGuire, to undergo a safe and effective mercury detoxification program under the guidance of a qualified practitioner.

(Important: Many of the symptoms listed above can signal a life-threatening condition. Of course, if you have symptoms that might indicate a serious medical condition, get checked out immediately by your integrative healthcare provider).

Fortunately, there are simple steps you can take to begin to minimize the harm of mercury exposure.

Adding probiotic foods to your diet can help to restore the health of the gut microbiome. Go heavy on foods that promote the production of glutathione, which is depleted by mercury. Brussels sprouts, broccoli sprouts, and avocados can help fill the bill.

Omega-3 fatty acids such as DHA can help protect against the damages of mercury, while R-alpha lipoic acid can reduce oxidative stress and preserve glutathione.

Finally, if you opt to have your mercury fillings removed, use the services of a trained biological dentist — who will utilize the proper protocol for safely removing them.

Outrageously, the American Dental Association continues to insist that mercury fillings are safe. But extensive independent research – and the list of chronic diseases and dangerous symptoms associated with mercury exposure – indicates otherwise.

(NaturalHealth365) Anxiety is a challenging, yet all too common, condition that should END_OF_DOCUMENT_TOKEN_TO_BE_REPLACED

(NaturalHealth365) These days, you can’t seem to have a conversation about longevity END_OF_DOCUMENT_TOKEN_TO_BE_REPLACED