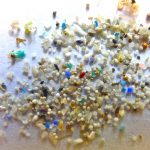 (NaturalHealth365)  You see your home as a safe haven, a place where you can relax and escape the world’s dangers.  Your home is supposed to be the safest place in the world, right?  Not so fast.

Recent research has uncovered yet another household hazard, and this one is even more alarming because it is almost impossible to avoid.  It has been found in our food, water, the air we breathe, and even in our blood.  It’s microplastics, and it’s everywhere.

Microplastics are tiny plastic particles that are less than 5 mm across.  They were first discovered on British beaches by the University of Plymouth, UK, marine ecologist Richardson Thompson.  While the initial concern was the risk they pose to marine life; there is a growing concern about what these particles do to the human body.

These tiny plastic specks can come from various sources, typically connected to heated plastic.  For instance, who hasn’t heated their lunch in a plastic container?  It’s easy and convenient.  But what if there was evidence that the plastic food container in which you are heating your food was shedding millions of microplastics directly into your food?

It isn’t so convenient anymore.

Exposure to microplastics linked to cancer, children most vulnerable

There isn’t enough research to make a definitive call regarding the danger of microplastics to humans.  One study identified the two highest risk exposure groups as those who live in lower-income countries and young children, regardless of living conditions.

While the jury is still out, there is no denying that plastics harm human health.  In addition, plastics production relies heavily on petrochemicals which are also surrounded by controversy.  Many studies show that they are toxic and can be dangerous to humans.  The amount of exposure, as well as long-term effects, raise multiple questions.

One of the primary concerns about the danger microplastics present is they may increase the risk of certain types of cancer.  While this study indicates the danger is relatively low, the risk is still present, and our children are the most vulnerable.

Here is how to reduce microplastics in your home

There are several ways to reduce the number of airborne microplastics in your home. For example, vacuuming regularly as opposed to sweeping can significantly reduce your exposure, as can selecting natural fibers for furniture, carpets, and clothing instead of fabrics made from petrochemical-laden polymer fibers.

It may require a few extra steps to cut down on your family’s exposure to microplastics, but it’s worth it.  After all, nothing is more important than your family’s health – and making your home a truly safe haven is where it begins.

(NaturalHealth365)  The controversy over caffeine consumption during pregnancy is a long-standing one.  END_OF_DOCUMENT_TOKEN_TO_BE_REPLACED