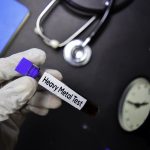 (NaturalHealth365) Toxic heavy metals – generally defined as a group of dense compounds with adverse health effects – are found virtually everywhere: in food, water, soil and even within the air we breathe.  So prevalent are these unwanted substances that researchers tell us that we all carry a certain amount of these metals in our bodies – depending on age, health and exposure.  So if you’re dealing with any serious health issue … considering a heavy metal detoxification program may be a wise choice.

Naturally, the question remains: why be so concerned about things like arsenic, lead and mercury?  Well, most integrative healthcare providers agree (and warn us!) that heavy metal toxicity can effect every aspect on our life.  For example, if you are experiencing chronic fatigue, brain fog or depression – you should continue to read this article.

Step one: Have you ever gotten tested for heavy metal toxicity?

In reality, you don’t need to live near a hazardous waste site, or a manufacturing plant that releases lead or mercury in the form of industrial pollution, to experience exposure to heavy metals. Prolonged use of metal-containing paints, personal care products or pesticides, or ingesting contaminated food, can also cause excessive metals to accumulate in the body.

Of course, acute heavy metal intoxication – the sudden intake of high levels of heavy metals – is a life-threatening condition that can cause kidney failure and damage the central nervous system, heart, digestive tract, liver, endocrine system and bones.

But, what about chronic toxicities from repeated exposures to relatively low levels of heavy metals?

Natural health advocates believe there is cause for serious concern. While Western medicine considers true clinical metal toxicities to be rare, many integrative healthcare providers believe that heavy metal amounts under the classical toxicity threshold can still cause great harm, depleting the body’s store of antioxidants such as, glutathione.

Let’s protect the most vulnerable among us

Children – particularly sensitive to lead intoxication – are exposed to lead in at least 4 million households throughout the United States; there is no identified “safe” level of lead exposure in children. Pregnant women and unborn babies are also believed to be particularly at risk.

A trio of toxins lies at the forefront.  Mercury, lead and cadmium, three of the primary heavy metals currently causing concern, all affect the body in different ways.

Mercury, which displaces iron and copper in the body, causes oxidative damage and inactivates natural protective antioxidants; it can also cause a range of adverse effects, from tremors and loss of coordination to kidney failure.

Cadmium, which binds to red blood cells, disrupts the body’s metabolism of the essential mineral zinc, and can lead to decreased bone mineralization.  A known carcinogen, cadmium is absorbed through cigarette smoke.  It is also found in soil and ocean water.

Chelation therapy: An old standby gets a new twist

For many years, chelation therapy has been a primary treatment for heavy metal detoxification. Chelating agents, which include dimercaprol, calcium-disodium EDTA and DMSA, bind to toxic metal ions, making it easier for the body to excrete them.

Unfortunately, chelation therapy can also flush essential trace minerals from the body, and can have toxic effects which include kidney overload, cardiac arrest, anemia and mineral deficiency.

In addition to sparing the body’s essential minerals, these new magnetic chelators can be specifically directed to target affected organs.

Scientists are also tweaking the science of chelation by combining known chelating agents to achieve better effects. In a review published in 2010 in International Journal of Environmental and Residential Public Health, the authors noted the use of DMSA used in tandem with the antioxidant n-acetyl-cysteine.

Scientists have long been puzzled by the fact that elevated blood levels of metals don’t necessarily translate to clinical metal toxicity. On the other hand, metal toxicities can occur in some people with levels believed to be “safe.”

Toxicogenomics, the study of the way toxin exposure changes gene expression, can help determine the true toxicity of metal levels, as well as helping to treat the damage. For example, finding out which genes contribute to resistance to heavy metals not only helps to solve the mystery of individual tolerance to heavy metals, but offers exciting implications for prevention.

In a 2008 review of toxicogenomics published in Journal of Environmental Biology, the authors expressed their hope that identification of novel molecular targets could help treat cancers resulting from heavy metal exposure.

How to reduce toxic metal uptake and minimize your risk

Experts say you can reduce your toxic metal uptake by consuming adequate amounts of the antioxidant vitamin C and E, as well as trace minerals such as zinc, iron and selenium. Carefully reading labels; having mercury-based, silver fillings removed safely; eating organic foods and opting for high-quality (heavy metal tested) supplements are also great ways to reduce your risk of heavy metal toxicity.

In addition, substances like chlorella – an algae-derived nutraceutical food available in health food stores and online, have been shown in clinical studies to accelerate the excretion of methyl mercury; n-acetyl-cysteine, folate, garlic powder, probiotics and cilantro extract.  All of these items have a “detoxifying effect.”

Remember, although heavy metal accumulations can threaten your health … there are effective therapies and appropriate lifestyle decisions that can greatly minimize the risk of harm.