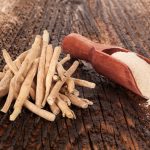 (NaturalHealth365) According to the Anxiety and Depression Association of America, over 40 million adults in the United States currently suffer from anxiety and sleep disorders.  These problems can accelerate aging and even shorten life, with experts listing heart disease, immune deficiencies, digestive diseases, diabetes, and obesity as among the conditions that can be caused or contributed to by stress.  In fact, stress is so widespread – and so damaging – that experts estimate that the condition plays a role in 75 to 90 percent of all primary care visits!

The good news is that an ancient Ayurvedic herb, ashwagandha, can block the harmful effects of stress – while balancing levels of calming chemical messengers known as neurotransmitters.  Let’s take a look at some of the most promising benefits of ashwagandha.

Ashwagandha, botanically known as Withania somnifera and sometimes referred to as winter cherry or Indian ginseng, is classified by researchers as an adaptogen: a substance that promotes health and helps the body deal with the effects of stress.

Ayurvedic medicine holds ashwagandha in high regard as well, giving the herb the important designation of “rasayana,” a remedy so beneficial that it is believed to slow aging and even prolong life.  Scientists say that ashwagandha owes its therapeutic properties to its high content of withanolides, a group of naturally occurring steroids with disease-fighting capabilities.

Among its other properties, ashwagandha is neuroprotective, anti-anxiety, antidepressant, antidiabetic, anti-inflammatory and anti-obesity.  And, there is a scientific basis for ashwagandha’s soothing effects.  Research shows that it activates nerve-cell receptors for GABA, a neurotransmitter needed for a calm mood and restful sleep.

One of the most significant benefits of ashwagandha is its ability to protect against the breakdown of acetylcholine – a neurotransmitter vital for learning and memory – in a way similar to Aricept, a pharmaceutical medication intended to treat Alzheimer’s disease and other forms of dementia.

Anxiety and obesity – which often involve stress-based eating and food cravings – are linked.  However, peer-reviewed research suggests that ashwagandha can help.

In a double-blind study published in Journal of Evidence-Based Complementary and Alternative Medicine, 52 subjects under chronic stress were given either 600 mg a day of ashwagandha extract or a placebo for eight weeks.

The team found that the subjects receiving ashwagandha extract displayed lowered levels of cortisol, the “stress hormone,” along with a reduction in food cravings.  The participants also reported better quality of life and improved well-being, leading the team to recommend that ashwagandha be used for weight management in individuals under chronic stress.

In a separate study published in the Indian Journal of Psychological Medicine, patients with chronic stress were given 300 mg of ashwagandha twice a day for 60 days.  Like the participants in the first study, the patients had reduced blood levels of cortisol and lower scores on stress assessment scales.

The researchers concluded that ashwagandha “safely and effectively improved resistance towards stress” and improved quality of life as well.

According to preliminary research, this medicinal herb may help improve cognition

Alzheimer’s disease, which currently affects over 5 million Americans, involves disruptions in the communication between neurons – the brain cells that send and receive chemical messages.  Loss of memory, language, and reasoning skills are the tragic result.

Encouragingly, preliminary studies support the ability of withanolides in ashwagandha to reconstruct damaged neurons and regenerate neurites, the structures that promote communication between nerve cells.  In other words, withanolides may be able to perform a sort of “repair job” at the cellular level.

This ability was supported by an animal study, “Neuritic regeneration and synaptic reconstruction induced by withanolide A,” published in British Journal of Pharmacology.  The research, performed on mice with laboratory-induced memory deficiencies, showed that withanolide A caused significant regeneration of axons and dendrites in the cerebral cortex and hippocampus, thereby helping to repair the all-important synapses.  And, the regeneration was accompanied by at least partial recovery of memory.

Of course, human studies are needed to determine if ashwagandha can perform the same feats in human brains.  If so, it could play a key role in helping to protect against neurodegenerative conditions such as Alzheimer’s and Parkinson’s diseases.

Some research has already been performed on the benefits of ashwagandha for human cognition, and have yielded encouraging results.  In one promising study, ashwagandha extracts were found to improve mental function in people suffering from mild cognitive impairment.

A separate double-blind study published in PLOS One involved 75 participants with moderate to severe anxiety.  The volunteers received either a naturopathic course of therapy – involving dietary counseling, deep breathing exercises, daily dosages of ashwagandha and a multivitamin – or a protocol consisting of conventional psychotherapy, deep breathing exercises and placebo pills.

The team used the Beck Anxiety Inventory and other psychological tests to evaluate anxiety levels, mental health and quality of life.  The results were clear-cut – and impressive.

The takeaway: While both methods significantly helped reduce anxiety (with no adverse effects), ashwagandha outperformed psychotherapy – one of the most respected techniques in psychiatric treatment.

If you would like to try ashwagandha to ease anxiety and stress, experts advise choosing an organic extract standardized to contain 1 to 10 percent withanolides.  Natural healers typically recommend amounts of 300 to 600 mg a day – but, as always,  check first with your integrative doctor before supplementing.

While no one can avoid all stressful situations at all times, ashwagandha can help neutralize the harmful effects on the body.  As an added bonus, this versatile herb is free of the toxic side effects and potential for addiction that accompany pharmaceutical anti-anxiety drugs – making it an effective solution for anxiety -and  a definite “win/win.”

(NaturalHealth365)  There are morning people, and then there are night people.  Why END_OF_DOCUMENT_TOKEN_TO_BE_REPLACED