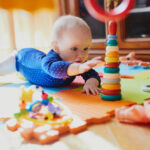 (NaturalHealth365)  Due to the popularity of cigarettes in the United States in the 1970s and the major fires they caused, flame-retardant chemicals were developed.  The tobacco industry was urged to make self-extinguishing cigarettes.  Instead, they created a front group called the National Association of State Fire Marshalls – which pushed for laws requiring fire-retardant furniture.

In 1975, California laws led to a national standard requiring furniture manufacturers to douse their couches and mattresses with flame-retardant chemicals.  Since then, flame retardant has been applied to most household items, such as furniture, electronics, and even baby products.  And, no surprise to health-conscious consumers, studies are proving that these toxic chemicals contribute to cancer, chronic disease, and attention deficit problems in children.

Without consent: our youngest children are being exposed to toxic chemicals

Since national standards were established requiring fire-retardant furniture, nearly all household items in the United States contain harmful flame-retardant chemicals.  This includes couches, mattresses, electronics, appliances, and even baby products.  Some of the items – with the heaviest chemicals usage – include:

Most people go through life without ever being informed about the extent of harm these toxic chemicals have on their health.  Here are some of the most disturbing facts about flame retardants:

1.  Flame retardants make fires more toxic.  Flame retardants applied to products do NOT forbid them from catching fire (which may be a surprise to most people).  However, the chemicals give off higher smoke, soot, and carbon monoxide levels.  Hence, these three things are more deadly than the burns obtained from fire.

2.  Toxic household dust is created.  Trisphosphate (TDCPP) is the most widely used flame retardant in the United States today.  It is used in furniture and most baby products.  Household dust is created from the foam of most of these items, and children often pick them up with their hands as they crawl around on the floor.

Since small children have a habit of putting their hands in their mouths, this creates a health risk for children.  In fact, Environmental Health Perspectives revealed studies that have suggested TDCPP to be a neurotoxic – an endocrine disruptor and a reproductive toxicant.

3.  Health problems are proven.  Studies prove that 90 percent of Americans have some level of flame-retardant chemicals in their bodies.  In addition, these same toxins are known to accumulate in breast milk and increase the risk for health problems from infertility and birth defects to lower IQ levels and behavioral problems in children.

More than 80,000 chemicals have never been fully tested for toxic effects

The Toxic Substances Control Act (TSCA) was originally formed in 1976 to ensure the safety of chemicals used in household items.  However, there are 80,000 chemicals available in the United States that have never been fully tested for their toxic effects on human health or the environment.

Although new laws in a few states make it possible for manufacturers to meet the new standards without the use of flame retardants in household items, major damage has already been done and continues.  Many households still use items that have long-term use (sofas, mattresses, and baby products) that contain these dangerous chemicals which cause chronic disease.

Further, the laws have not actually banned flame retardant use by manufacturers.  In truth, the laws allow manufacturers to decide how to meet the new standards – whether it’s with flame retardant chemicals or something else.  With chronic disease on the rise since the 1970s, TCSA reform is desperately needed.