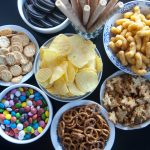 (NaturalHealth365) Have you ever wondered why there are so many flavors of potato chips or why supermarket shelves are stacked like a Tetris game of cereal and cookie varieties, the more over-the-top the taste combinations the better?  Changing a food item just a little, say, from barbecue to honey barbecue or ranch to cheddar ranch, creates a novelty that lights up the brain with excitement.  Corporate food giants exploit that excitement by creating highly processed foods loaded with salt, sugar, and fat, and they profit, at the expense of consumers’ health, from the biological idea that the faster something reaches the brain, the greater the brain’s response.

In the book Hooked: Food, Free Will, and How Corporate Food Giants Exploit Addiction, Pulitzer Prize-winning journalist Michael Moss explores the corporate manipulation and deception used to trigger our addiction to highly processed foods.  While the link between ultra-processed foods and addiction isn’t new, the degree to which food giants alter additives and engineer foodstuffs with manufactured chemicals is criminal.

Food Giants engineer cheap, calorie-dense foods that are highly rewarding to the brain

According to food scientists, humans are prone to “sensory-specific satiety,” which means we feel full when we consume a lot of the same taste, smell, or flavor.

By slightly altering a food item (Wavy to Wavy Ranch potato chips or Oreo to Double Stuff Oreo cookies) or engineering new flavor chemicals, Food Giants exploit the idea of “sensory-specific satiety,” as even a small change lights up the reward circuit of the brain, releasing dopamine and conveying pleasure.  Food industry jargon refers to this as the “bliss point,” and companies will add more sugar, salt, and fat to their products to reach an optimal and addictive level of tastiness.

Moss suggests that our evolved tendency “makes it difficult for us to say no when we’re presented with food that’s even just slightly different from what we just ate.”

It’s EVERYTHING but the food that’s addictive

If the brain responds to processed foods the same way it does to heroin, then Big Brands like Kellogg’s, Kraft, and Coca-Cola are corporate cartels.

Remove the engineered flavor chemicals and altered additives, the psychoactive sugar compounds and salt (forms of salt have been developed to dissolve faster than normal salt and therefore jolt the brain quicker) and the processed food might be edible, but it wouldn’t be addictive.  And it certainly wouldn’t sell.

It’s one thing to know that corporate food companies manipulate products and put profits ahead of public health but should these companies also be held responsible for fueling the nationwide obesity epidemic?

How much of our disordered eating is based on a lack of self-control and how much is linked to years of corporate manipulation?  Do you need those potato chips or is the man behind the curtain manipulating your taste buds with salt, sugar, and fat?

It’s something to think about next time you’re at the supermarket.  And, if you want to teach these big food manufacturers a lesson, simply choose fresh (organic) food – as much as possible.  It’s a smart choice for your future health.

(NaturalHealth365) You’ve probably heard that too much sugar harms your health.  Sugar END_OF_DOCUMENT_TOKEN_TO_BE_REPLACED