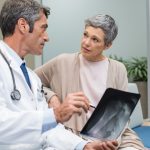 (NaturalHealth365) Osteoporosis – characterized by weak, brittle, easily-broken bones – and low bone mass currently affects a staggering 54 million people in the United States, according to The National Osteoporosis Foundation.  In addition, osteoporosis causes a shocking 1.5 million fractures every year, many of them in people aged 70 and older.  But, today, we’ll focus on how melatonin can help.

In light of these facts, it’s easy to see why researchers at McGill University are excited about a study showing that melatonin supplements strengthen elderly bones.

In a study published in the May 2014 edition of Rejuvenation Research, the team found that melatonin supplements slowed down bone breakdown in elderly rats, and caused them to develop bones that were stronger, thicker and denser than those of rats in the control group.

The rats used in the study were all 22 months old – roughly 60 years old, in human years. After ten weeks of melatonin supplementation, the team used micro-computed tomography and histomorphometry to examine the rats’ femurs, and found that the melatonin benefited two different types of bone tissue: trabecular, or spongy, bone – which contains bone marrow – and cortical bone, which forms the hard outer “shell” of the bone.

In every instance, the femurs of the rats that had been given melatonin had greater volume and density, and were more resistant to breakage. Calling the results “compelling evidence that melatonin supplementation can exert beneficial effects on age-related bone loss,” the team stopped short of recommending that people take melatonin supplements to treat osteoporosis. They stated that clinical studies are needed first.

Next, the researchers are eager to find out if melatonin, often referred to as the “sleep hormone,” can reverse bone breakdown and repair already-damaged bones.  Just keep in mind that melatonin is known to help people sleep at night … and, poor sleep can disturb the bone remodeling process.

Melatonin also increases glutathione levels – which reduce the risk of free radical damage that can be harmful to the bones.

Where does melatonin come from?

Melatonin is endogenous, meaning it is created in the body. According to University of Maryland Medical Center, the body naturally produces up to .3 milligrams daily.

Secreted at night from the pineal gland, this substance has been called “the time-keeping hormone” because it signals the body that it is nighttime.

Generally speaking, children have the highest levels of this nighttime hormone; and researchers point out that levels tend to decrease, as we age.  In addition to promote sleep, this sleep hormone is a potent antioxidant, with antidepressant effects as well.

How exactly does this hormone improve bone density?

Two different types of bone cells are involved in the body’s normal maintenance of bone. Cells called osteoblasts build up bone by day, while osteoclasts break it down at night.

As people age, they generally sleep less; this causes the osteoclasts to be more active, thereby accelerating bone breakdown.  By helping to regulate circadian rhythms, melatonin supplements can help slow down the actions of the osteoclasts, resulting in denser, stronger and more flexible bones.

Putting the brakes on the aging process

An earlier animal study showed that melatonin can slow down the aging process.  In a study published in 2009 in PLoS One, researchers studied the effects of melatonin supplementation on white-toothed shrews. The tiny mammals normally begin to age at about a year old; in the wild, their lifespan rarely exceeds 18 months.

Noting that the shrews manifested their advancing old age by beginning to lose their regular circadian rhythms, researchers began giving them melatonin just before they reached the 12-month mark.  The results were extremely encouraging.  For the shrews that had been given melatonin, the onset of aging was delayed by three months.

Although this may sound insignificant, remember: relative to a shrew’s lifespan, three months represents roughly 15 years in human time – many of us would be thrilled to have our first signs of aging delayed for a decade and a half!

Should I take this supplement or not?

Melatonin supplements, available in powder and tablet form, are currently used to address a variety of conditions, including insomnia, fibromyalgia and jet lag.  Talk to a trusted healthcare provider to find out if melatonin supplementation might be right for you. Because the long-term use of melatonin hasn’t been well studied, it should only be taken for short periods of time.

Of course, you can always ramp up your dietary intake of melatonin.  In addition to being produced in your body, melatonin occurs naturally in assorted nuts, spices and fruits – including mustard, almonds, sunflower seeds, coriander and cherries.

But, for record-breaking levels of dietary melatonin, nothing beats fresh purslane – this nutritious salad green has the highest melatonin content of any food tested to date.  Scientifically known as portulaca oleracea, purslane features crunchy yet juicy leaves, and a slightly tangy, refreshing flavor.

Long considered a delicacy in Europe, purslane is becoming more popular in the United States – look for it in organic supermarkets and ethnic food stores.

Bottom line:  healthy circadian cycle, with each day followed by a good night’s sleep, just might be the closest thing we have to a fountain of youth. Melatonin’s ability to maintain circadian rhythms and promote restorative sleep could make it a major player in osteoporosis and anti-aging therapies of the future.

(NaturalHealth365)  Organic produce sales are booming around the world.  Of course, by END_OF_DOCUMENT_TOKEN_TO_BE_REPLACED

Safeguard your health with THESE lifesaving strategies

(NaturalHealth365)  A sad statistic: nearly half of all Americans have at least END_OF_DOCUMENT_TOKEN_TO_BE_REPLACED