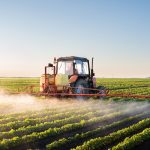 (NaturalHealth365) Global soils are the source of all life on land.  They produce food, store carbon, and purify water.  If topsoil is lost through “bad treatment,” it takes thousands of years until the soil is produced again.  Pesticides and chemical poisons qualify as “bad treatment,” and without urgent action to halt the degradation caused by pesticides, pollution, and intensive farming, the future of global soils is bleak.

The pesticides and chemical poisons applied to agricultural soil are causing widespread damage to the vital organisms and microbial life that help keep soils healthy.  According to research published in Frontiers in Environmental Science, “negative effects are evident in both lab and field studies, across all studied pesticide classes, and in a wide variety of soil organisms and endpoints.”  Scientists found 71% of the tested parameters showed negative effects from pesticide exposure, including earthworms, beetles, springtails, and other organisms.

The numbers are staggering.

A third of the Earth’s land is severely degraded, and fertile soil is being lost at the rate of 24 billion tons a year.  According to soil scientist Dr. Rattan Lal, 135 billion tons of soil have been lost from farmland since the Industrial Revolution.  If that rate of degradation continues, researchers say the world’s topsoil could be gone in 60 years, which is a grim projection considering topsoil is where 95% of the planet’s food is grown.

Out of sight, out mind … but the damage is being done

It’s easy to overlook that vital soil organisms play a crucial role in the food web.

While toxic pesticides lurk in up to 70% of the produce in the U.S., contaminate groundwater in rural areas, and have been found to concentrate in the milk and meat of farmed animals through contaminated feed, researchers warn that soil organisms aren’t often considered when accessing the impact of pesticides and toxic farm chemicals.

For example, why is it that the U.S. tests chemicals on honeybees – insects that may never come into contact with soil – but not invertebrates?

According to Professor Nico Eisenhauer of Leipzig University, microbial species are essential for turning waste into nutrients, but 99% of them have yet to be studied by scientists.  In fact, a quarter of all the animal species on Earth live beneath our feet -out of sight, out of mind -and provide the nutrients for our food.  One teaspoon of healthy soil can contain up to a billion bacteria and more than 1km of fungi, algae, and other microfauna.

How to tackle the decline in biodiversity

Protecting soil structure needs to be included in the modern farming system.  While the UN continually stresses the importance of soils to future food security, “soil awareness” and the impact toxic pesticides have on vital organisms doesn’t get the big headlines like, say, Roundup cancer lawsuits or the increasing threat of dicamba drift.

It’s time to work with the natural system and not fight against it.  Raising awareness is the first step — the next step: better land regulation, improved farming efficiency, and EPA regulations on agricultural pesticides.

(NaturalHealth365)  Research over the past decade has shown, without a doubt, that END_OF_DOCUMENT_TOKEN_TO_BE_REPLACED