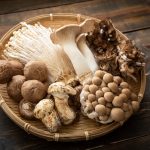 But the benefits of edible fungi go far beyond the gut.  One study suggests that eating mushrooms could be a simple way to help enhance brain health, especially as you age.

The six-year-long, cross-sectional study from Singapore, published in 2019 in the Journal of Alzheimer’s Disease, evaluated the differences in cognitive function among 663 seniors (aged 60 and up) who ate varying amounts of mushrooms every week.

The results were significant.  Compared to older adults who ate less than one serving of mushrooms per week, older adults who consumed more than 2 servings per week had a whopping 52 percent reduced risk of mild cognitive impairment (MCI).

According to the Alzheimer’s Association, MCI “causes a slight but noticeable and measurable decline in cognitive abilities, including memory and thinking skills.”  People with MCI are more likely to be eventually being diagnosed with Alzheimer’s disease or other types of dementia.  For this reason, preventing MCI can have a profound impact on a person’s brain health and quality of life.

Incredibly, this protective effect of eating mushrooms remained even after the team of researchers adjusted for confounding factors including “age, gender, education, cigarette smoking, alcohol consumption, hypertension, diabetes, heart disease, stroke, physical activities, and social activities.”  The researchers concluded that their data “support the potential role of mushrooms and their bioactive compounds in delaying neurodegeneration,” an important feat given the rising prevalence of dementia.

The results of this study aren’t without precedent.  According to two epidemiological studies cited by Harvard Medical School, mushrooms may prevent the growth of amyloid protein, a substance in the brain linked to dementia.  The bioactive compounds in mushrooms also appear to have an antioxidant effect, which is important in reducing inflammation and staving off age-related diseases.

For optimal brain health, here’s how many mushrooms to add to your weekly diet (plus some simple preparation ideas)

In the Singapore study, the team of researchers defined one serving of mushrooms as 3/4 cup cooked.  According to their data, this means that consuming over 1.5 cups of cooked mushrooms per week could yield significant protective benefits for your brain health, although even just one small serving per week might still be helpful.

Edible mushrooms come in a variety of species – including chanterelle, cremini, enoki, morel, oyster, portobello, porcini, and shiitake – that offer a nice array of flavors and textures.  Add them to sauces, soups, salads, or main dishes.  Just make sure to avoid some common preparation and cooking mistakes, so you can avoid the unpleasant rubbery or mushy texture.  Some top mushroom no-no’s: