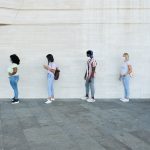 (NaturalHealth365) After a solid year of social distancing, mask mandates, and oppressive government lockdowns, one would assume we’ve had plenty of time to ask some difficult questions.  What percentage of the so-called COVID measures are based on sound science?  Do we know the risks and benefits of wearing face masks or the rationale for the 6-foot social distancing rule?  The reality is, most people do not ask for proof but instead willingly give up their basic freedom.

Take social distancing as an example.  Where is the science that unequivocally proves that staying 6 feet apart keeps you safe from contracting the novel coronavirus?  In a world where our “new normal” resembles nothing less than a horrific dystopian scene from a sci-fi movie, it is time to question the narrative and dig a little deeper.

The “6-foot rule” is based on outdated science, according to new study

Little circles in grocery stores, pharmacies, and restaurants serve as a constant reminder of the new standard of measurement – the six feet of distance we must maintain between ourselves and another human being.  In a recent report published in the BMJ, scientists claim that the six-foot rule is oversimplified, outdated, and based on experiences of past viruses.

The researchers also pointed out that eight out of ten studies confirmed respiratory droplets to travel beyond six feet and as far as 26 feet when propelled by a sneeze.  These results suggest that SARS-CoV-2 could go way beyond the “safe zone” of 6 feet.

Former Food and Drug Administration (FDA) Commissioner Scott Gottlieb admitted that the six-foot social distancing mandate used across the United States and the world “wasn’t based on clear science.”

According to Mr. Gottlieb, the social distancing requirement has been the costliest mitigation tactic used to slow the spread of the virus – yet, it does not have much scientific evidence to support its effectiveness.

Just how far away is “far enough” when it comes to COVID-19?

Depending on where you live, the “safe distance” appears to be vastly different.  Interestingly, the novel coronavirus knows not to cross the one-meter mark when spreading in China, Denmark, and France.  However, in Germany and Australia, 1.5 meters is the rule of thumb, while in the US, 6 feet or 1.8 meters.

Why all the disparity?  It turns out, a multitude of factors influence how far you should be from another person to reduce your risks of getting infected.  For instance, larger respiratory droplets tend to carry more viral particles.  In addition, the viral load of someone infected also plays a role, and it can vary from person to person.  Finally, environmental factors, such as ventilation, humidity, and temperature, all impact what happens to respiratory droplets.

As you can see, an infinite number of scenarios make it almost impossible to determine the exact “safe distance.”  Social distancing measures do not appear to be based on sound science; they are educated guesses, at best.

Even if social distancing reduces infection rates to a certain extent, it is important to look at the downside of employing such a mandate in the long term.  Asking people to suppress their human need for connection, see their friends, family members, and refrain from human touch have significant negative implications.

A 2015 meta-analysis determined that chronic social isolation increases the risk of mortality by as much as 29%.  A growing body of evidence also confirms that social isolation over the long term can increase the development of a host of health issues, such as depression, heart disease, and dementia.

While people of all ages are susceptible to the harmful effects of social isolation and loneliness, older people may be impacted the most.  Nothing can replace face-to-face interactions, seeing a loved-one smile, or getting a big hug.

Is social distancing worth the price?

From a purely scientific perspective, the evidence is not strong enough to support the long-term mandate of social distancing.  The question we should all ask, are the supposed benefits of living a life in social isolation worth the harmful effects?

Does it make sense to isolate ourselves from our friends and family to protect ourselves from getting an infection that has a 99.9% survival rate?  Perhaps it’s time to shift our focus away from fear and take our lives back.  Ultimately, a much greater focus on strengthening the immune system is a wise choice for all those concerned.

(NaturalHealth365)  According to the American Cancer Society, “There is no information that END_OF_DOCUMENT_TOKEN_TO_BE_REPLACED

(NaturalHealth365)  First, it was menstrual problems, and now, it’s current and future END_OF_DOCUMENT_TOKEN_TO_BE_REPLACED