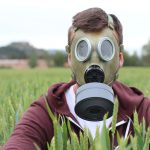 (NaturalHealth365) No doubt, Monsanto has earned its reputation as the “ultimate corporate villain” and pop cultural bogeyman.  Glyphosate, the synthetic herbicide ingredient patented by Monsanto (in 1974) – and the main substance in the popular weedkiller Roundup – is its much-maligned best seller.  The problem is … toxic chemicals like, glyphosate have been linked to cancer, reproductive complications, child development disorders, internal organ failure, and a host of other serious health problems.  Yet, government “health” agencies do nothing to get this toxin off the market!

But do human and environmentally friendly weedkillers really exist or are “eco” companies just greenwashing naive and ethically-minded consumers?

Despite the virtuous language of clean and green products, in many of these products no healthy-minded or ecological virtue exists.

BEWARE: How companies greenwash consumers with a lack of transparency about toxic chemicals

In 2015, the International Agency for Research on Cancer declared glyphosate a possible human carcinogen.  The U.S., however, has refused to ban Roundup.  And while some states have restrictions and ordinances on the chemical’s use, the U.S. sprays more than 1.8 million tons of glyphosate a year.

It’s a different story in Europe.  Restrictions have been put on glyphosate in several European Union countries, and these restrictions have created a free-market for alternatives to glyphosate-based herbicides.

Nevertheless, transitioning to new technologies allows big companies and manufacturers to manipulate loopholes and regulations, or at the very least, camouflage their wrongdoing with lies of omission and a lack of transparency.

According to the French researchers, toxic levels of lead, iron, nickel, silicium, titanium and arsenic were found in products clamming to be green or eco-friendly.  The “undeclared presence” of toxic chemicals can explain carcinogenic effects in humans but also mammalian tumors and lethal kidney and liver diseases.

Or, to put it another way: these new, alternative products have the potential to cause the same health issues and environmental degradation as glyphosate.

Eric Schlosser ended his book Fast Food Nation with a poignant and oft quoted line: “The first step toward meaningful change is by far the easiest.  Stop buying it.”

But it begs the question, in this day and age how is meaningful change possible if the alternative to what you’re buying is just as bad or dangerous or toxic as the original?  It doesn’t matter if we’re talking about a potentially lethal weedkiller and its glyphosate-free alternative or an industrial farmed meat patty and its McPlant substitute.

When mega-companies are out to make huge profits and mega-marketers willing to do anything to get you to buy those companies’ products, who can you trust?  Greenwashing is just a byproduct of a corporate-controlled bubble.

Of course, the debate will continue.  Perhaps the market needs to be tamed with more rules and restrictions.  For sure, corporate misbehavior should not be tolerated.  And, oh yes, more whistleblowers need to blow their whistle – as loud as possible.

But, in the end, we all know … it’s one thing to (intellectually) understand that the system needs to change.  But, an entirely different thing to start reforming it (now) and to truly hold evildoers accountable.

(NaturalHealth365)  The Wall Street Journal (WSJ), an organization that reports the news, END_OF_DOCUMENT_TOKEN_TO_BE_REPLACED