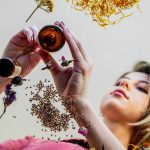 (NaturalHealth365) According to the Anxiety and Depression Association of America, anxiety disorders affect 40 million American adults every year.  And, no doubt, the additional stress-producing impact of the coronavirus on mental health has probably yet to be fully realized.  So, while Western medicine attempts to “treat” anxiety disorders with (toxic) prescription medications such as benzodiazepines … these potentially addictive drugs can feature toxic side effects – leading many to turn to anxiety fighting herbs and supplements for relief.

In a Harvard Medical School review, the authors examined the ability of a dozen natural herbs and supplements to reduce symptoms of anxiety – which is characterized by intense, excessive worry and fear involving everyday situations.

Ashwagandha is one of the most effective anxiety-fighting herbs

Ashwagandha, botanically known as Withania somnifera, is revered in both Traditional Chinese Medicine and the Ayurvedic healing system, where it is known as a “rasayana” – a rejuvenating herb that prolongs life.

Scientists characterize ashwagandha as an adaptogen – a substance that helps the body deal with physical and emotional stress – and point out that it has been shown to control key mediators of the stress response. Ashwagandha is also acknowledged as anti-inflammatory, neuroprotective and memory-enhancing, making it of possible value in treating neurodegenerative conditions such as Alzheimer’s disease.

By study’s end, both ashwagandha groups had lower levels of cortisol, the “stress hormone”- along with improved quality of sleep. The 600-mg group reported that stress levels were significantly reduced (when compared to placebo), leading the researchers to conclude that ashwagandha was “beneficial” in reducing stress and anxiety.

Researchers say: Valerian may be the “most promising” of all herbal interventions

Valerian, another ancient herb, was famously advised by the Greek physician Hippocrates to alleviate nervousness, trembling and heart palpitations.  In fact, valerian – botanically known as Valeriana officinalis – could conceivably be characterized as the “O.G.” of herbal sedatives.

Now, modern science is revealing the wisdom of Hippocrates’ advice.  Researchers report that valerian root is rich in a compound known as valerenic acid, which is believed to deliver its calming effect by acting on GABA receptors in the brain.

In a Harvard review of studies, the authors evaluated the use of valerian (along with eleven other herbal medicines) and concluded that valerian has stress-reducing properties.

Not only that, but: the authors cited a study concluding that valerian may work as well as benzodiazepine drugs in relieving anxiety -and deemed it among the “most promising” anxiety-fighting herbs for stress and insomnia in bipolar disorder.

Integrative doctors typically suggest valerian amounts between 400 and 600 mg a day for anxiety and insomnia.

Don’t let its sedate, old-fashioned pedigree fool you.  While lavender is a common planting in decorative and “cottage” gardens, its essential oil may help offer relief from the uniquely anxiety-inducing, jarring crises of modern life.

Known for its calming and relaxing scent, lavender oil is often used in aromatherapy to ease anxiety, depression, nausea, headaches and insomnia.  Lavender essential oil is rich in both linalool and linalyl acetate, a pair of natural antioxidant compounds with powerful calming effects on chemical receptors in the brain.

Lavender oil’s reputation received a boost when an extensive 2017 review of studies published in The Mental Health Clinician supported its use as a short-term treatment for anxiety disorders.

As a side note: After being diluted in a ratio of 9 to 12 drops per ounce of olive or coconut oil, lavender essential oil can also be applied topically for a soothing massage.

Like lavender, chamomile (Matricaria recutita) is a familiar staple of herb and decorative gardens.  But, more to the point, chamomile is also valued by herbalists and natural healers as a trusty remedy for a variety of ills, including headaches, insomnia, indigestion and anxiety.

Research shows that chamomile can help increase the action of the calming brain chemical GABA, thereby significantly reducing anxiety.  Clinical research has been performed on the ability of chamomile to treat generalized anxiety disorder – and researchers found that chamomile reduced the severity of symptoms during relapse.

In addition, chamomile is also believed to help alleviate depression and fatigue.  Herbal healers typically advise daily amounts of 400 to 1,600 mg of chamomile, in divided servings, for anxiety.

Alternately, chamomile is available as a comforting tea. Natural health experts advise drinking one to four cups a day to combat anxiety, tension and nervousness.

While chamomile is generally recognized as safe, people who are allergic to any members of the aster family – which includes chrysanthemums, daisies, marigolds and ragweed – should not use it.

Kava kava, botanically known as Piper methysticum, is derived from a shrub native to the Pacific Islands. With a history of centuries of ceremonial use by the indigenous peoples of the Pacific, kava kava has mildly sedative and muscle-relaxing effects.

In one placebo-controlled trial, participants were given kava kava in amounts of either 120 mg or 240 mg a day.  A third group was given just a placebo.

The research team discovered that both amounts of kava kava caused significant reductions in anxiety when compared to placebo -and praised it as “safe,” as well.  And, in one particularly persuasive study, researchers likened kava kava’s efficacy in treating anxiety disorder to that of the pharmaceutical drugs buspirone (Buspar) and venlaxafine (Effexor).

In another “plus” for kava kava, scientists have noted that it causes less daytime sedation and cognitive impairment than drugs in the benzodiazepine family.  Interesting to note: In 2002, the reputation of kava kava suffered a blow when the FDA announced that supplements could lead to severe liver injury.

However, this has come into some question, with the World Health Organization now calling for a “re-evaluation” of the data.

Naturally, consult your integrative doctor before taking, not only kava kava, but any of the above anxiety-fighting herbs and supplements.  And, don’t eliminate or reduce prescribed anxiety medications unless advised to do so by your doctor.

Other techniques that may help you manage anxiety and depression include getting regular exercise, along with sufficient sleep and proper nutrition.  Such natural techniques as guided meditation, controlled breathing, yoga and cognitive behavioral therapy can also be very useful.

While anxiety can be an unpleasant and disturbing experience, these natural anxiety-fighting herbs and supplements could be helpful in quieting nervousness, calming tension and setting you back on the path towards emotional peace and happiness.

(NaturalHealth365)  Horsetail – a tall, shaggy weed that grows in wetlands and END_OF_DOCUMENT_TOKEN_TO_BE_REPLACED

(NaturalHealth365)  Menopause is a natural part of getting older, signaling the end END_OF_DOCUMENT_TOKEN_TO_BE_REPLACED

(NaturalHealth365)  According to the American Association of Endodontists, more than 25 million END_OF_DOCUMENT_TOKEN_TO_BE_REPLACED