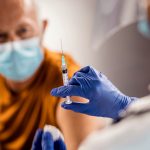 (NaturalHealth365) The COVID injection mandate for adults: what was once called a conspiracy is now poised to become a part of the “new normal.”  Just this Wednesday, August 11, Governor Gavin Newsom announced that all teachers and staff at public and private schools in the state of California would be required to get the shot or face weekly COVID testing.

But as health officials around the country continue to impose new restrictions in an attempt to coerce people to get the jab, some researchers are doing their part to uncover the hidden impact of these experimental drugs.

The June 2021 issue of the International Journal of Infectious Diseases published an article called “First case of postmortem study in a patient vaccinated against SARS-CoV-2.”  The study’s co-authors, all based in Germany, discuss in great detail a case of an 86-year-old male resident of a retirement home who received one dose of the Pfizer shot.

The man’s past medical history included high blood pressure, chronic venous insufficiency, dementia, and prostate cancer.  However, he was asymptomatic prior to getting the shot.

Two weeks following his injection, the man collapsed during breakfast.  Three days later, he presented to the hospital with worsening diarrhea.  The man’s health deteriorated, and sadly he died four weeks after the Pfizer jab.

Upon autopsy, the researchers discovered a number of details:

In case you were wondering, “sterile immunity” or “sterilizing immunity” means that the immunity conferred upon a person from a vaccine would completely prevent the vaccine’s target organism (in this case, SARS-CoV-2) from causing disease.  Such injections would be, theoretically, “100%” effective.

However, for a vaccine to achieve sterile immunity, the injection would need to trigger the immune system to create proteins called neutralizing antibodies, which target and neutralize pathogens.  According to The Lancet and other publications, the mRNA COVID shots have failed to demonstrate this level of effectiveness.

This should come as no surprise, as sadly, we continue to hear about breakthrough cases of COVID infections in fully jabbed individuals.

A call to all doctors and medical providers: KEEP QUESTIONING

The case study just described is one of many that we can expect to see published.  Given the nature of observations made in this particular case, ALL doctors should be asking more questions.

Indeed, the case study’s authors agree: “Comprehensive analysis of autopsy data must be performed to provide more detailed insights into lethal adverse effects and any deaths associated with vaccination.”

Doctors should also not be afraid to ask questions – nor shunned for doing so.

This may feel difficult in the current environment we are living in, where “fact-checkers” resoundingly shut down “misinformation” and divisive, fear-based propaganda continues to omit the full truth of what is really going on (as much as we can fully know the truth at this time).

But the reality is, there are still many questions about COVID-19 to be addressed by Western medicine.  Without our medical providers standing up for genuine scientific inquiry, public health – and informed consent – remain at risk.

(NaturalHealth365)  The telecommunications industry has rolled out 5G connectivity quite inconspicuously.  The END_OF_DOCUMENT_TOKEN_TO_BE_REPLACED