Can this berry truly protect YOU from heart disease and type 2 diabetes? 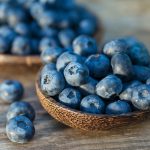 (NaturalHealth365) With their lustrous indigo color and sweet-but-tart taste, ripe blueberries are perfect little globes of flavor and juiciness.  Not only are blueberries delicious, but they are generally acknowledged as a true “superfood” by nutritionists, natural health experts, and physicians alike.  But can the health benefits of blueberries really be confirmed?  A steadily accumulating body of scientific evidence says, “yes!”

In a March 2020 review published in Advances in Nutrition, the authors credited regular blueberry consumption with reducing the risk of a host of serious diseases – including heart disease, diabetes, obesity, and Alzheimer’s disease.  Let’s take a look at some of the ways in which these succulent berries lower the odds of developing life-threatening conditions.

Anthocyanins – natural plant pigments responsible for the deep purples, blues, and reds in fresh fruits and vegetables – are the primary active constituent of blueberries.  These disease-fighting plant compounds have potent antioxidant and anti-inflammatory effects – and may even have anticancer and anti-aging properties as well.

When it comes to supplying anthocyanins, blueberries leave other fruits and vegetables “in the dust.”

Red apples, for instance, contain 12 mg of anthocyanins for every 100-gram serving (roughly half of a large apple), while 100 grams of sweet cherries contain 122 mg.  By contrast, a 100-gram serving – about two-thirds of a cup – of lowbush blueberries (Vaccinium angustifolium) contains a massive 487 mg of anthocyanins.  Highbush blueberries (Vaccinium corymbosum, the type most commonly cultivated in the United States) clock in somewhat lower, with a still-impressive 387 mg.  Blueberries’ nearest competitor in anthocyanin content, blackberries, feature 245 mg per 100 grams.

A DELICIOUS way to avoid the threat of heart disease

The researchers evaluated over 200 studies to perform the review, including observational and epidemiological studies on humans.  And, they found plenty of evidence to support their reputation as a heart-healthy food.

Anthocyanins in blueberries excel at scavenging harmful free radicals that cause oxidative stress and trigger disease.  And, their anti-inflammatory effects help them act against atherosclerosis, the deposits of calcified plaque artery-clogging plaque.  In addition, blueberries support the health of the endothelium – the fragile lining of arteries – and promote the production of beneficial blood pressure-lowering nitric oxide.

In a 14-year study of 87,000 participants, anthocyanin-rich berries cut the odds of developing high blood pressure – a primary risk factor for heart disease – by 10 percent.  In one eight-week study, obese people who had a high risk of heart disease noted a 4 to 6 percent reduction in blood pressure after eating a two-ounce serving of blueberries a day.

In addition, a trio of different studies showed that a higher intake of anthocyanins could cut the risk of coronary artery disease by up to 25 percent.  When it came to preventing heart attacks, or myocardial infarctions, blueberries did even better.  In a study published in Circulation, the official journal of the American Heart Association, the team found that higher intakes of blueberries, strawberries, and total anthocyanins were associated with cutting heart attack risk by up to a third!

But wait, your brain can benefit too!  Blueberries protect cognitive function and ward off Alzheimer’s disease, according to study

Blueberries’ antioxidant qualities can protect the brain from oxidative stress, which speeds the aging process and impairs brain function.

In one small but influential placebo-controlled study published in Journal of Agriculture, Food and Chemistry, older adults with mild cognitive impairment drank 8 ounces of wild blueberry juice every day for twelve weeks.  They experienced improvements in markers of brain function, included paired associate learning and word list recall.  As if that weren’t helpful enough, depressive symptoms were reduced.  The researchers reported that anthocyanins in blueberries are associated with increased signaling between brain cells, leading to better memory function.  In another study, blueberry supplementation for 90 days led to improvements in memory in healthy older adults.

Researchers believe that blueberries’ neuroprotective effects may extend to helping prevent Alzheimer’s disease and dementia as well.  This is welcome news, as the incidence of Alzheimer’s disease is expected to reach 16 million cases in the United States within the next 30 years.

Type 2 diabetes, which currently affects over 34 million Americans, is verging on epidemic status.  But blueberries may be able to help.

Apparently, blueberries get to work right away on discouraging type 2 diabetes.  In yet another study, a single serving of anthocyanins was found to lower blood sugar!

Blueberries also act against diabetes by helping to fight obesity, a primary trigger for the disease.  In a promising trial of overweight young adults, replacing 50 grams of carbohydrates with the same amount of blueberries led to favorable reductions in body weight.

Word to the wise:  Blueberries are also rich in vitamins and fiber

A cup of fresh blueberries (about 150 grams) contains a healthy 4 grams of fiber, along with a quarter of the recommended daily amount for antioxidant vitamin C and over a third of the RDA for vitamin K. Impressively, blueberries offer up these valuable nutrients at a scanty 84 calories a cup — about the same caloric cost as eating seven (yes, only seven) potato chips. (Obviously, blueberries are the better choice.)

Apparently, it’s not necessary to gobble berries in massive amounts to support health. Researchers report that even modest consumption of blueberries, such as a third of a cup a day, can rack up big health benefits.

If fresh berries are expensive or inconvenient, don’t stress: you can still access many of the benefits of blueberries by using them in powder or frozen form.

And, if berries just aren’t your “thing,” anthocyanins are available as a supplement.  Natural healers typically advise amounts ranging from 50 mg to 350 a day – but check with your integrative doctor before supplementing.

While the review’s authors advised more study, they were clearly enthused by the therapeutic benefits of blueberries.

“It can be widely agreed that the regular consumption of tasty, ripe blueberries can be unconditionally recommended,” the scientists declared.

What could be simpler, or more delicious, than that?

(NaturalHealth365)  Every 34 seconds in the United States, somebody dies of heart END_OF_DOCUMENT_TOKEN_TO_BE_REPLACED

(NaturalHealth365) You’ve probably heard that too much sugar harms your health.  Sugar END_OF_DOCUMENT_TOKEN_TO_BE_REPLACED