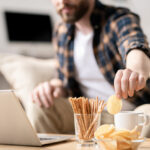 (NaturalHealth365)  It is often said that you are what you eat.  Those who eat organic fruits and vegetables along with other unprocessed food tend to radiate both in terms of skin and essence.  Alternatively, those who eat fast food, processed “treats,” and other sugary and chemical-laden foods typically look fatigued and unhealthy.

Thanks to academicians at Harvard University and Tufts University, we now have the science necessary to back up the optics of the connection between food, health, and personal aesthetics.  Researchers at these two universities have identified a strong link between consuming overly processed foods and negative health outcomes.

The researchers referenced above found that the excessive consumption of processed food causes health issues, including a heightened risk of colorectal cancer.  To be more specific, it is highly-processed foods that make colorectal cancer all the more likely.  The moral of this story is clear: increase your intake of natural, organic, and fresh vegetables, fruits, complex carbohydrates, and other non-processed food, and you’ll do your body a favor.  As recently published in BMJ, let’s take a closer look at the study’s details.

The Harvard and Tufts researchers determined those who eat significant quantities of overly-processed foods have a nearly 30% higher risk for colorectal cancer.  Colorectal cancer ranks third in terms of the most common types of cancer in the United States.  Elevated risk for colorectal cancer was applicable to men who consume significant amounts of processed items as compared to men who consume less processed food.  Interestingly, the study determined that the association above did not apply to the opposite sex.

The findings were strictly limited to men, meaning the excretory systems of men appear particularly vulnerable to the excessive consumption of processed foods.  But, in all honesty, we can’t imagine that processed foods would be good for women to eat.

Why did processed foods become so popular so quickly?

Part of the reason why processed foods soared in popularity in the 80s and 90s stems from the dynamics of the country’s marketing laws.  Former president Reagan signed off on changes to FCC rules and regulations that empowered corporations to market highly-processed foods, including sugar-laden cereals, to impressionable youngsters.

Add in the fact that American society shifted away from eating at home to more ‘fast’ foods in these two decades, and the stage was set for convenient and affordable processed foods to soar in popularity.

Read between the lines, and you’ll glean the following from the study: processed food, including those especially unhealthy processed meats, fall under the umbrella of ultra-processed sustenance that poses a serious threat to human health.  Such foods are laden with sugar and nearly deplete of fiber, spurring weight gain, excretory system malfunctions, colorectal cancer, and additional negative health outcomes.

Studies similar to the one described above may spur a societal change in which everyday people, federal governments, food-makers, and other industry players agree that it is in the interest of the collective good to minimize or eliminate certain chemical additives from foods.

Fast forward a decade into the future, and you might find ultra-processed foods banned from the shelves or saddled with a utilitarian sin tax similar to cigarettes and alcohol.  Stay tuned as additional details from subsequent studies analyzing the potential risks of consuming ultra-processed foods are revealed in the months ahead.

The message here is simple and clear: The more you eat processed foods, the greater your cancer risk.

(NaturalHealth365)  Research over the past decade has shown, without a doubt, that END_OF_DOCUMENT_TOKEN_TO_BE_REPLACED