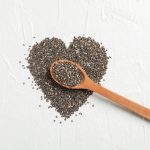 (NaturalHealth365) It seems that every week there is a new “superfood” that promises to support and promote health.  And, most nutritionists agree that foods like organic kale, arugula, and berries are really wholesome choices, packed as they are with antioxidants and valuable micronutrients.  However, the reigning king of all superfoods may well be among the tiniest.  It’s hard to conceive of a food more worthy of the title of “superfood” than chia seeds.

Scientific research shows that regular consumption of these tiny seeds can improve cardiovascular disease risk factors, the number one killer in the nation.  But, when it comes to working against other chronic diseases, these tiny packages of nutrition are just getting started.

Chia seeds are derived from the Salva hispanica plant, with a pedigree and history of use dating back to Aztec and Mayan civilizations – where they were revered as a source of strength and energy.  (Incidentally, “chia” is a Mayan word for “strength”).

So, the power of the chia seed – in a sense – isn’t exactly “news.”  What is relatively recent is the compelling scientific confirmation of its ability to help ward off modern-day scourges such as heart disease, obesity, and type 2 diabetes.

One of the keys to chia seeds’ power is their content of alpha-linolenic acid (ALA), an omega-3 fatty acid.  Omega-3 fats – which are also found in fish and fish oil – have been credited with anti-inflammatory, antioxidant, and even antidepressant properties.  Chia seeds are a good source of this healthy fat, particularly for those who don’t eat animal products.

Among other gifts to the cardiovascular system, chia seed has been shown to reduce triglycerides – harmful fats in the blood – combat unhealthy abdominal fat, quench inflammation, and lower blood pressure in people with hypertension.

In a study published in Diabetes Care, researchers gave one group of diabetic patients 37 grams (about two and a half tablespoons) of chia seeds a day, while a control group received wheat bran.  The volunteers, who all had well-controlled diabetes, maintained their standard therapies throughout the study.

After 12 weeks, the researchers focused on the seeds’ effects on heart health, which is particularly important for patients with type 2 diabetes.  Experts say that people with diabetes are two to four times more likely to develop heart disease.

The chia group experienced meaningful reductions in blood pressure – a major risk factor for heart disease – along with an eye-opening 40 percent decrease in C-reactive protein, an inflammatory molecule linked with heart disease.  The participants also doubled their levels of eicosapentaenoic acid, or EPA, one of the valuable omega-3 fatty acids found in cold-water fish and fish oil.

In addition, the chia group significantly decreased their A1C, a measure of blood sugar control over time.

A one-ounce, two-tablespoon serving of chia seeds provides a whopping 11 grams of fiber – which can help discourage overeating by creating a sense of satiety or fullness.  A study published in Nutrition Research and Practices yielded good news regarding chia seeds’ ability to promote healthy weight and act against obesity.

The study was as practical as it was simple: healthy volunteers were given chia seeds as a mid-morning snack to examine the effect on short-term appetite.  Researchers varied the amount of seeds daily, with participants receiving either 7 grams (roughly half a tablespoon) mixed with yogurt, 14 grams with yogurt, or chia seed-free yogurt.  They were then offered lunch, with no particular restrictions on foods or amounts.

On chia seed days, the participants reported meaningful reductions in hunger – and added that they felt fuller and more satisfied after the snack.

The upshot of the study was that the chia seed snack seemed to cause the volunteers to consume significantly fewer calories at lunchtime.  They also experienced less desire for unhealthy sugary foods, showing that chia seeds may reduce food cravings that trigger binge eating.

Want better blood sugar control? Adding chia seeds to your diet may just be what you need

Another chia seed benefit is its ability to improve insulin sensitivity – meaning chia helps give insulin more “bang for the buck” in controlling blood sugar.  Studies support chia seeds’ ability to help ward off type 2 diabetes and its consequences, which include a heightened risk of heart disease.

In a randomized, controlled study published in the European Journal of Clinical Nutrition, volunteers were given bread that had been enhanced with either ground chia seeds, whole seeds – or no chia seeds at all.  The team found that both the ground and whole chia seeds were effective in helping to significantly lower blood sugar and control post-meal blood sugar “spikes.”  The impressed researchers also noted that no adverse effects were reported from the chia seed/yogurt combination.

Take a look at chia seeds’ nutritional profile. You will be impressed!

An ounce of chia seeds provides almost half of the daily recommended amount of fiber for adults.  In addition to helping control weight, dietary fiber functions as a prebiotic – meaning that it supplies fuel for beneficial bacteria in the all-important gut microbiome.  It also helps to filter toxins and carcinogens from the body.

The same ounce of seeds also contributes 4 grams of high-quality protein.  In contrast, an ounce of cottage cheese contains only 3.5 grams.

In addition to their impressive content of protein and fiber, chia seeds are chock-full of important minerals.  A mere ounce contains almost a third of the recommended daily amount for manganese – an important constituent of the body’s antioxidant defenses – along with a third of the RDA for magnesium, needed for a normal heartbeat and blood pressure.

Like another crunchy nutritional superstar, sunflower seeds, chia seeds are rich in zinc, which is vital for immune health.  Another nutritional “plus” for chia seeds is that they are gluten-free and non-GMO.

The subtle and delicate taste of these little seeds means that they are easy to incorporate into recipes, where they enhance flavors rather than overwhelm.  Use chia seeds to amplify a casserole or enrich a stew, add them to baked goods and bread, toss them on top of cereals, yogurt, and salads – or nibble on them “as is” for a wholesome snack.

Versatile and nutritious, chia seeds can help the body in surprising ways.  Maybe it’s time to start adding these “mighty morsels” to your diet.

(NaturalHealth365)  Diabetes is a struggle for millions of Americans, whether they are END_OF_DOCUMENT_TOKEN_TO_BE_REPLACED

Ease symptoms of eczema by eliminating THESE foods

(NaturalHealth365)  If you suffer from eczema, you know how frustrating it can END_OF_DOCUMENT_TOKEN_TO_BE_REPLACED

(NaturalHealth365)  Being on a diet takes lots of hard work and discipline.  END_OF_DOCUMENT_TOKEN_TO_BE_REPLACED