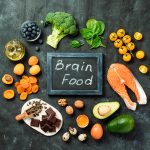 (NaturalHealth365)  The fact that more and more people are living longer lives has led to a bittersweet reality.  As life expectancy increases, so does the incidence of Alzheimer’s disease, a debilitating condition that can steal away judgment, cognition, and memory.  According to the Centers for Disease Control and Prevention (CDC), 5.8 million people in the United States currently have Alzheimer’s disease or other forms of dementia.  This number is projected to swell to almost 14 million by 2060.

New research supports the vital role of choline in brain development and cognitive function.  In fact, many scientists believe this vitamin-like nutrient may help preserve healthy cognitive function into old age.  However, in a recent article published in the medical journal Nutricion Hospitalaria, the authors reported that many people don’t achieve adequate choline intake – thereby missing out on the benefits of optimal levels.  So, let’s look at some functions and benefits of choline – and find out why this nutrient is so essential for brain health.

Choline is needed for brain function, yet inadequate intake is widespread

Choline is needed by the body to synthesize phosphatidylcholine, an important phospholipid.  (Phospholipids are the fat-based molecules that make up the membranes necessary for the integrity and health of cells).

Choline also produces acetylcholine, a neurotransmitter needed for learning and memory.  While choline is naturally produced in the liver, there’s a “catch.”  The liver doesn’t produce enough to meet the body’s needs – so some choline must come from the diet.  However, while true choline deficiencies are rare, many people have a suboptimal intake of this vital compound.

According to the National Institutes of Health, a disturbing 90 to 95 percent of pregnant women consume less choline than the adequate daily intake advised by the Institute of Medicine.  Other people at risk for insufficient choline include those with specific genetic mutations and those requiring total parental nutrition – a method of feeding that bypasses the gastrointestinal tract.  In fact, choline is so important that the American Society for Parenteral and Enteral Nutrition recommends that it routinely be added to parenteral nutrition formulas.  The group has also called for developing a commercial product containing choline.

Benefits of choline include protecting and preserving neurons

The authors stressed the importance of choline to cognitive development, noting that it is essential in the perinatal stage for optimal development and for preventing neural tube defects in newborns.  In addition, adequate choline intake appears to benefit people at the other end of the age spectrum as well.

Phosphatidylcholine (produced by choline) helps preserve and protect brain cells, leading some researchers to believe that consuming higher levels of phosphatidylcholine could help slow the progression of Alzheimer’s disease.  In addition, studies have shown that higher levels of choline are associated with a lower risk of dementia – an excellent reason to keep choline levels “topped up.”

Choline is associated with better cognitive performance in adults

Clearly, choline is closely linked with “brainpower” – evidenced by the fact that a higher intake is associated with better scores on cognitive tests.  In one study involving close to 2,200 adults aged 70 to 74 years and published in the British Journal of Nutrition, participants with lower blood levels of choline did more poorly on cognitive tests – demonstrating slower perceptual and processing speeds and poorer general cognition and executive function – than those with higher levels.

An additional study of nearly 1,400 adults aged 36 to 83 years found that those with higher choline intakes exhibited better verbal and visual memory.

Choline is needed to transport fats from the liver, so it’s not surprising that deficiencies are closely linked with the development of nonalcoholic fatty liver disease (NAFLD).  Characterized by the accumulation of fat in the livers of people with no history of excessive drinking, NAFLD is present in a shocking 90 percent of obese people and in 65 percent of those who are overweight.

While many cases of NAFLD are mild, it can sometimes progress to a more severe form of the disease known as nonalcoholic steatohepatitis (NASH), which in turn can lead to liver cirrhosis, liver failure, liver cancer, and death.  A large Chinese study involving 56,195 older adults found that women with the highest intakes of choline (412 mg a day) reduced their risk of NAFLD by almost one-third when compared to women who ingested 179 mg a day.  (Men with a higher choline intake reduced their risk by a quarter).

The takeaway seems clear: to keep this important organ in tip-top shape, adequate choline intake is a “must.”

You can ramp up your dietary intake of choline with grass-fed beef, wild-caught salmon, and cage-free poultry and eggs.  With a hefty 356 mg of choline in every three-ounce serving – more than half the recommended dietary amount for adults – beef liver is the king of choline-rich foods.  Eggs are rich sources as well, with one hard-boiled egg contributing 147 mg of choline.

Vegans and vegetarians can get choline through cruciferous veggies, beans, nuts, seeds, and whole grains.  (Incidentally, roasted soybeans clock in at a respectable 107 mg of choline per cup.)  You can also obtain phosphatidylcholine in lecithin, a common supplement, and food additive.

The Institute of Medicine lists the recommended dietary allowance for choline as 425 mg a day for women and 550 mg for men, with 3,500 mg a day constituting the tolerable upper intake level.  If you are interested in supplementation, opt for a product from a reputable vendor.  (Pro tip: Natural health experts recommend a form of choline known as CDP as the most bioavailable).  As always, check first with your integrative doctor before supplementing.

As this recent research attests, the benefits of choline are far-reaching.  When it comes to promoting cognitive function, ensuring healthy choline levels is a “no-brainer.”