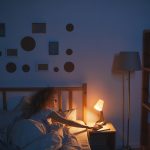 (NaturalHealth365)  A surprising 40 percent of all Americans sleep with some form of light in the room, and scientists now say this might not be such a “bright” idea.  In fact, while it might be pleasant to wake to the dawning sun streaming across your face, this may not be ideal for restful sleep either.

A brand-new study from researchers at Northwestern University shows that even moderate exposure to light – such as that emitted by a bedside lamp, TV, or laptop – during sleep can have unexpected health consequences.  So let’s find out how light exposure during sleep is harmful to metabolic health and why darkness is best.

The study, which was published in the Proceedings of the National Academy of Sciences, was conducted on healthy adults.  The volunteers had one night of sleep in a dimly lit room, followed by a night of sleep in a brighter room.  (The scientists measured light in units called luxes, with 100 lux constituting a “moderately-lit” room and 3 lux used in a “dim” room.)

A separate group of volunteers slept for two nights in the dimly lit room.  When all the results were calibrated, the team found that a single night of sleeping in the 100 lux room caused accelerated heart rate and increased morning insulin resistance compared to a dimly lit environment.  Participants in the bright room also spent less time in restorative slow-wave and rapid eye movement (REM) sleep.

Lead author Dr. Phyllis Zee, chief of Sleep Medicine at the Northwestern University Feinberg School of Medicine (and, yes, one can’t help noticing that she is aptly named!) reported, “… A single night of exposure to moderate room lighting during sleep can impair glucose and cardiovascular regulation, which are risk factors for heart disease, diabetes, and metabolic syndrome.”

BAD NEWS for restful sleep: Keeping the light on during sleep activates the “wrong” nervous system

By changing the circadian system and suppressing the melatonin rhythm, nighttime light exposure alters glucose metabolism and increases insulin resistance.  In addition to increasing heart rate and raising cortisol production, nighttime illumination arouses the sympathetic autonomic system, which is “bad news” for restful sleep.  The scientists noted that the sympathetic nervous system is supposed to be active during the day, while the parasympathetic nervous system is designed to be active at night.

Dr. Zee warned that over-activity of the sympathetic system can lead to insulin resistance and prediabetes and contribute to the development of obesity and metabolic syndrome.  The new study is not the only research showing harm from light exposure during sleep.  The scientists reported that an earlier study suggested that artificial light in a room at night was associated with obesity in women.  Higher levels of bedroom light exposure have also been linked with a higher incidence of type 2 diabetes in elderly participants.

Of course, the common-sense solution is to close the blinds, draw the curtains and extinguish all lights at bedtime.  If a light must be on to facilitate getting up safely, it should be a dim light close to the floor.  By the way, amber or red/orange lights are less stimulating to the brain than white or “blue” light (from computers and TV screens).  If your room is still too light, blackout shades and eye masks can be a wise move.

“If you’re able to see things really well, it’s probably too light,” Dr. Zee remarked.  And, you may need to reposition the bed, so the dawning sun doesn’t stream across your face.  Experts in sleep hygiene also advise curtailing online activity at least an hour before bed.  (In other words: no bedtime scrolling, or – even worse – “doomscrolling” through the day’s breaking news bulletins and controversies).

In fact, one study showed that people who ate salmon three times a week had better overall sleep.  Vegetarians and vegans can obtain omega-3 fatty acids and melatonin by nibbling walnuts, while almonds are rich in both magnesium and melatonin.  Pro tip: To avoid acid reflux, you should enjoy these calming foods two hours before bed.

Herbal teas can be helpful as well.   Chamomile tea is high in apigenin – an antioxidant with mild sedative properties – while passionflower tea contains apigenin and increases the production of the calming neurotransmitter GABA and inhibits stress-inducing chemicals in the brain.  As always, check first with your integrative doctor before using herbs to promote sleep.

When you think of it, getting a good night’s sleep is one of the most restorative, revivifying things you can do.   So switch off those lights, turn off that TV, unplug that laptop, and embrace the dark.  Your body will thank you for it.