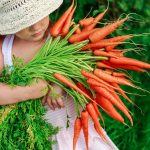 (NaturalHealth365) Have you ever noticed that you have more energy when you eat nutrient-rich, organic food and have a better overall feeling of wellness than when you eat fast food?  There’s a reason for that, and researchers are linking an organic diet to improved cognition and higher academic performance in children.

The study, published in Environmental Pollution, was conducted by researchers at the Barcelona Institute for Global Health.  It took an in-depth look at environmental hazards that children come into contact with regularly.  Without examining unique lifestyle factors individually, the researchers concluded that “healthy diets, including eating organic diets, are richer than fast food diets in nutrients necessary for the brain…”  According to the study, antioxidants, vitamins, and fatty acids found in a balanced, healthy diet are credited with enhancing cognitive function in children.

A large-scale study of 1,300 participants examines the connection between children’s diet and cognitive development

The children participating in the study ranged in age from 6 to 11 years old, all in good health.  In addition, because the participants were already a part of HELIX, researchers already had data on the mothers’ pregnancies and birth experiences as well as urine samples for all participants.

They used each participant’s home addresses to evaluate the area for environmental exposures, such as level of pollution and how close they were to parks and natural areas.  The researchers administered tests to both child and mother to determine specific lifestyle factors, alcohol use and smoking by either or both parents, the child’s diet, their environment indoors, level of physical activity, and other habits.

Researchers tested the children’s working memory, attention function, and fluid intelligence through both clinical tests and computer evaluations.  Then, they combined these scores as an overall level of cognition.

Pesticides and other chemicals have a detrimental impact on cognitive health

The researchers concluded that eating organic foods helped children score higher in tests measuring working memory and fluid intelligence.  Lower scores on each of the tests were found to have several contributing factors.  For instance, children who scored lower on fluid intelligence tests tended to have a diet high in fast food.  They were also regularly exposed to tobacco smoke and experienced house crowding.  Children with lower scores on working memory tests tended to regularly be exposed to poor indoor air quality.

Pesticides and other chemicals in conventional foods – and their absence in organic foods – are believed to be the primary reason for the study results.  Children are smaller, so the levels of these dangerous chemicals in their bodies are higher.

Other studies have linked pesticides to ADHD, developmental problems, and lower IQ in children.  It is important to note that organophosphate insecticides which are specifically associated with lower IQ scores in children are still commonly used on vegetables and fruit in the United States.

While the test results seem to reveal a direct link between test scores and diet and environmental factors, more research is needed to provide solid evidence that an organic, nutrient-rich diet improves cognitive performance.  Nevertheless, this offers some solid evidence to switch to an organic diet, dramatically lowering pesticide levels in the body.

No doubt, eating organic food will take you one step closer to better health and higher brainpower.

(NaturalHealth365)  Research over the past decade has shown, without a doubt, that END_OF_DOCUMENT_TOKEN_TO_BE_REPLACED