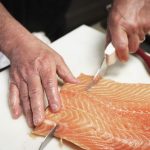 (NaturalHealth365) Sadly, food is often politicized … especially when we’re talking about frankenfish – genetically manipulated salmon.  But what, in fact, does that really mean?

In a recent interview with food media journalist Alicia Kennedy, Carla Martin, founder and executive director of the Fine Cacao and Chocolate Institute, described it as follows: “If you go into a store and you buy food, you should be able to be assured, just in buying it, that it was somehow good for people, the environment, the economy, etc.”  Martin goes on to say that that assurance “is not guaranteed in any way.”

For example, genetically engineered (manipulated) salmon is not good for people or the environment … in any way.  And while the GMO Frankenfish might be “good” for the U.S. economy, and high-profile biotechnology companies in particular – of the 350,000 tons of Atlantic salmon consumed in the United States more than 95% is imported – once engineered genes are introduced into the wild salmon gene pool, it can not  be undone, and it would result in the destruction of diverse salmon runs and indigenous food sovereignty.

On November 5th, in a landmark case that protects the environment from genetically modified animals, the federal court for the Northern District of California declared genetically engineered (GE) salmon unlawful.

In 2015, the FDA allowed AquaBounty Technologies to produce genetically engineered salmon. According to the federal court, the FDA violated core environmental laws and ignored the serious consequences of approving plans to grow and commercialize engineered salmon.

GE salmon have different vitamin, mineral, and amino acid levels than non-GE salmon. They also have higher levels of insulin-like growth factor (IGF-1), which has been shown to increase the risk of certain cancers.

Studies have shown that there is high risk for GE salmon to escape into the wild and crossbreed with native fish.  It’s a phenomena known as transgenic contamination, and episodes of this type of cross-pollination have cost U.S. famers billions of dollars.

The politics and perils of eating frankenfish and other “fake foods”

From frankenfish to plant based Impossible Burgers to lab-growm meat, technology has promised us a food revolution for over a decade. Silicon Valley has long been partnering with the old barons of the meat industry to sell “ethically-minded” consumers solutions to sustanability and the climate crisis.

But there’s nothing ethical about mutant, transgenic salmon that grow seven times faster than wild North Atlantic salmon.  And there’s nothing revolutionary about food technology systems that have been spun and greenwashed and remarketed to the American people: it’s the same Big agriculture and corporate profits.

In the food industry, there’s a well-circulated Marxist notion that there’s “no ethical consumption under capitalism.”  But, whether you believe that (or not), shouldn’t companies have a responsibility to society?

Bottom line: business practices should not endanger people or the environment, and the U.S. government shouldn’t enable them.  It’s as unlawful as mutant salmon running amok in our streams.

What can we do as consumers? For starters, we can buy wild salmon and support local fishermen.  As it relates to all food that you eat, always know your source to protect your health.

(NaturalHealth365)  The food we eat should keep us healthy and strong.  But END_OF_DOCUMENT_TOKEN_TO_BE_REPLACED

(NaturalHealth365)  Being on a diet takes lots of hard work and discipline.  END_OF_DOCUMENT_TOKEN_TO_BE_REPLACED

(NaturalHealth365)  Chicken is the average person’s meat of choice, yet most people END_OF_DOCUMENT_TOKEN_TO_BE_REPLACED