Watermelon LOWERS blood pressure: See how to avoid the risk of heart damage 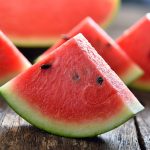 (NaturalHealth365) Cardiovascular disease remains the leading cause of death in the United States with one person dying every 36 seconds from this avoidable health condition.  No doubt, issues like obesity and high blood pressure fuel this ongoing crisis.  Yet, Western medicine remains clueless about the heart protective value of natural foods like, watermelon. (The science is amazing!)

The need is great: About 60 percent of all Americans either have high blood pressure or are at risk of developing it.  Diabetes, metabolic syndrome and fatty liver disease affect millions of people – with no end in sight.  So, we need to get the word out about the healing power of foods like, watermelon.

In a study published in the American Journal of Hypertension, researchers found that watermelon extracts significantly reduced blood pressure in overweight adults. And, the hypotensive effect held true whether the volunteers were under stress or at rest.

The volunteers were divided into two groups, with one receiving placebo and the other receiving L-citrulline and L-arginine – both amino acids derived from watermelon. They were then exposed to conditions that simulated the stress of being in cold weather, which can make the heart work harder and cause blood pressure to rise – the reason that obese, hypertensive people are at increased risk of stroke and heart attack when exposed to the cold.

Researchers found that the watermelon extracts reduced aortic blood pressure and myocardial oxygen demand – even when the volunteers were under cold-induced stress – and concluded that watermelon extracts provide cardioprotection by reducing overload to the heart, causing it to work more easily during stressful situations.

Science says the right nutrition can be good for the heart

This was not the first study in which watermelon extracts performed well in lowering blood pressure.

In a six-week clinical study published in 2010 in American Journal of Hypertension, L-citrulline and L-arginine from watermelon improved arterial function and lowered aortic blood pressure in middle-aged subjects who were prehypertensive, or at risk for developing high blood pressure and cardiovascular disease.

Researchers concluded that watermelon’s vasodilatory effects qualified it as a functional food – meaning one that has been scientifically shown to prevent disease and promote health.

How exactly does this fruit lower blood pressure?

Animal studies have also supported the ability of watermelon to prevent heart disease. In a 2011 study performed at University of Kentucky, watermelon significantly reduced atherosclerotic lesions in mice, while reducing weight and body fat and lowering levels of unhealthy LDL cholesterol.

The key to watermelon’s hypotensive powers lie in the fact it contains more citrulline than any other food on the planet. Citrulline, an amino acid produced in the body from glutamine, helps convert toxic ammonia to urea.

Another feature of citrulline is that it can be used by the body to make arginine, which produces the nitric oxide vital to maintaining healthy vascular tone and blood pressure.

Watermelon is also rich in lycopene – an antioxidant carotenoid that can help scavenge harmful free radicals that contribute to heart disease – as well as the antioxidant vitamin C and A.  In addition, a compound in watermelon called cucurbitacin E has potent anti-inflammatory effects, and can help combat the inflammation that has been linked with many serious diseases.

How much watermelon is best for me?

Due to watermelon’s sweet, delicate taste and refreshing texture, consuming this functional superfood should present no hardship.  Look for organic, fresh, fully ripened watermelon, which can contain as much as 250 milligrams of citrulline per cup.

For maximum health benefits, the flesh should be a deep, vibrant red; unripe or pinkish-white watermelon contains virtually no lycopene.

Some natural health experts recommend taking citrulline malate supplements to help with high blood pressure and arterial stiffness, especially for those who are overweight, elderly or diabetic. Discuss this with your integrative physician – who can advise you as to proper amount.

With new research supporting its heart-healthy qualities, there’s no reason not to indulge in slices of sweet, luscious watermelon.  Enjoy!

(NaturalHealth365) You’ve probably heard that too much sugar harms your health.  Sugar END_OF_DOCUMENT_TOKEN_TO_BE_REPLACED

(NaturalHealth365)  Menopause is a natural part of getting older, signaling the end END_OF_DOCUMENT_TOKEN_TO_BE_REPLACED

(NaturalHealth365)  More Americans are dieting than ever before.  Almost half of Americans END_OF_DOCUMENT_TOKEN_TO_BE_REPLACED