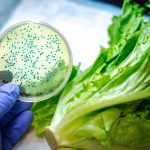 (NaturalHealth365) Since 2018, E. coli infections linked to salads and leafy greens have hospitalized more than 200 Americans, sickened 474, and left six dead.  Between 2009 and 2018, 40 food-borne oubreaks of E. coli have been confirmed in the U.S. Romaine lettuce is the main culprit, but the most deadly outbreak, in 2006, can be linked to baby spinach.

Romain lettuce, a tall head of sturdy dark leaves that is commonly used in Caesar salad and accounts for roughly 30 percent of the lettuce consumed in the United States, has had its reputation tarnished by conventional cattle and dairy operations. No, it’s not easy being green, especially when produce growers and livestock operators share the land, and wind, water and animals carry E. coli from manure to the produce fields.

Why is the risk of a food-borne infection higher in conventionally-grown greens?

According to a report from the U.S. Food and Drug Administration, three outbreaks of food-borne illness tied to romaine lettuce can be linked to the proximity of cattle. While it was once believed that E. coli illness was the result of eating undercooked beef, there are other routes of contamination that are more common. E. coli can get into the water and soil through the waste of domesticated and wild animals, fertilizer, irrigation water, water run-off, vehicles, farm equipment, and other agricultural products.

In Salinas Valley, California, where a vast majority of leafy greens are grown, romaine lettuce growers are located downslope from public land where cattle graze, a land arrangement that has resulted in several E. coli outbreaks in the past few years. Yuma, Arizona, another region known for its romaine production, has also been the source of several E coli outbreaks.

The two growing regions have the same thing in common: conventional livestock operators and produce growers share the land.

Most varieties of E. coli are harmless to humans. However, the E. coli 0157:H7 bacteria that can live in cattle without making them sick is the strain that can turn deadly for some food consumers.

Extreme complications, however, can include uremic syndrome, which is a form of kidney failure, and death.  Young children, the elderly, and people with compromised immune systems are the most likely to suffer serious complications from a food-borne infection.  E. coli infections typically occur two to eight days after eating contaminated food.

Good farming practices don’t deal with dangerous and toxic issues like unclean greens. The bottom line: until regulators and industry take concrete action and change the laws concerning the proximity of conventional cattle and dairy operations and where vegetables and fruit are raised, non-organic food isn’t 100% safe.

Of course, there’s always a risk of contamination and infection.  But, the idea is to reduce your risk – as much as possible.

To find out more about organic and sustainable farming practices listen to the NaturalHealth365 Podcast, “Going Beyond Organic Food” with Jonathan Landsman and Joel Salatin.

(NaturalHealth365)  The Wall Street Journal (WSJ), an organization that reports the news, END_OF_DOCUMENT_TOKEN_TO_BE_REPLACED

(NaturalHealth365)  Research over the past decade has shown, without a doubt, that END_OF_DOCUMENT_TOKEN_TO_BE_REPLACED