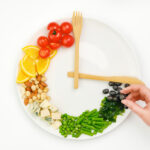 (NaturalHealth365)  Mention the phrase “global pandemic,” and most people very likely think of COVID-19.  But there’s another health threat on the world stage.  As far back as 2017, health authorities warned that type 2 diabetes – which has spread from affluent industrialized nations to emerging economies such as Asia, Latin America, and Africa – had achieved the frightening status of a pandemic as well.  Experts predict that cases worldwide will top 642 million by 2045.  However, the practice of intermittent fasting may offer a ray of hope.

In stunning research published in the Journal of Endocrinology and Metabolism, scientists report that this new dietary intervention led to complete remission for over half of the study participants.  Let’s take a closer look at this exciting behavioral approach.

Intermittent fasting, also known as time-restricted eating and Chinese Medical Nutrition Therapy, involves consuming calories only during a specific “window” of time – usually 8 to 10 hours.  In the small but promising study, patients with type 2 diabetes who followed an intermittent fasting routine for three months saw dramatic improvements in their condition.  The team reported that 90 percent of the 36 patients were able to reduce their prescribed treatments – which included insulin and blood sugar-lowering medications.

In addition, an eye-opening 55 percent of the participants experienced total remission, remaining free of type 2 diabetes for at least a year after discontinuing their medications.  (Remission is defined as HbA1c levels under 6.5. HbA1c is a measure of blood sugar control over time).  Lead author Dongbo Liu, Ph.D., expressed hope that the findings could have a major impact on the over 537 million adults worldwide who suffer from the disease.  “Type 2 diabetes is not necessarily a permanent, lifelong disease,” stated Liu.  But how exactly did the intervention achieve its impressive results?

The key to the method’s success appears to lie in the body’s circadian rhythms or sleep-wake cycle.  The researchers believe that adopting a consistent daily short window of feeding can promote health by helping to align the circadian rhythms of multiple organs, thereby assisting the body with the coordination of different processes and helping to manage diseases.

On the other hand, chronic circadian rhythm disruption – such as that experienced by shift workers – compromises the immune system and increases the risk for chronic metabolic diseases by triggering a host of ills, including glucose intolerance, weight gain, and fatty liver disease.

The new study built on earlier research highlighting the benefits of intermittent fasting.  The technique has been shown in studies to reduce body weight – even though participants normally aren’t advised to consciously reduce caloric intake.  Recent human studies have yielded promising results on the ability of time-restricted eating to reduce the risk of obesity, diabetes, and heart disease.  This dietary intervention is also believed to improve glucose sensitivity, lower high blood pressure, cut inflammation and decrease unhealthy cholesterol levels.

And there’s more encouraging research.  In an animal study recently published in Cell Metabolism, researchers concluded that time-restricted eating changes gene expression in a way that can help manage diseases.  Nearly 40 percent of the genes in the animals’ adrenal glands, hypothalamus, and pancreas were affected – a significant finding, as these organs are important for hormonal regulation.

Simply put, the intervention is based on the theory that maintaining a consistent, long overnight fast can significantly reduce the risk of chronic disease.  Although individual recommendations vary, the eating window – which is normally between eight and twelve hours long – shouldn’t “open” until at least an hour has passed after waking and should “close” three hours before the onset of an eight-hour sleep cycle.  The researchers noted that consistency is important and that patients should strive to maintain the same schedule on workdays and weekends alike.  Of course, more study is needed on this therapy. Consult your integrative healthcare provider before trying intermittent fasting.  And never stop taking your prescribed medications unless your doctor advises it.

In addition, performing regular exercise, getting plenty of restful sleep, and avoiding fried, sugar-laden, and heavily processed foods are all useful steps on the path away from type 2 diabetes.  As Dr. Lui puts it, “Diabetes remission is possible if patients lose weight by changing their diet and exercise habits.”  Although we’ve heard this concept before, the approach of intermittent fasting might present to you an effective way to reach that goal.

(NaturalHealth365)  More than 4,500 published studies have created a powerful body of END_OF_DOCUMENT_TOKEN_TO_BE_REPLACED