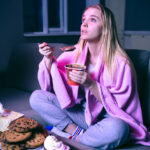 (NaturalHealth365)  You may have heard that eating late at night is bad news.  Some research indicates a connection between late-night snacking and an increased risk of obesity, more body fat, and difficulty losing weight.

However, there has been relatively little research on the topic.  But now, a recent study offers striking new evidence about why late eating might increase obesity risk.

Why eating late may increase your obesity risk

Obesity has become a modern epidemic.  It’s estimated that around 42 million people in the United States are obese.  These statistics are alarming, considering that obesity plays a significant role in the onset of several chronic diseases, like cancer and diabetes.  So naturally, scientists strive to understand what causes obesity.

There are three factors involved in obesity risk: how your body regulates calorie intake, fat tissue changes, and how many calories are burned.  Researchers at Brigham and Women’s Hospital conducted a study to look at exactly how eating late at night might affect these factors.

The study participants were all within range of being overweight or obese.  The participants were first evaluated under a strict early meal schedule and then while eating the same type of meals, except four hours later in the day.

The participants kept track of their hunger.  Researchers studied their blood samples, energy expenditure, body temperature, and adipose tissue during each meal protocol.  These tests helped the scientists determine and compare gene expression during both the early and late mealtimes.

The results were notable.  For one, the study found that late eating greatly impacts appetite-regulating hormones.  The hormone responsible for signaling satiety was found to be much lower under the late-eating protocol.

Additionally, late eating led to slower burning of calories and increased promotion of fat growth.  The study findings suggest that meal timing truly does play a role in obesity.

From the study, it appears that when you eat may be just as important as what you eat.  Still, meal timing isn’t everything.

People who eat late at night also tend to consume more calories and junk foods.  Emotional eating can also factor into the equation for some.  Also, simply being tired can cause you to crave higher-calorie foods.

Unfortunately, highly processed junk foods are often high in calories and deficient in nutrients.  Processed food has even been linked to a host of health problems, including colorectal cancer.  So the foods you choose are just as important as when you have meals or snacks.

Try these simple tips to maintain a healthy weight

Many processed foods are high-calorie and nutrient-deficient.  To help maintain a healthy body weight, seek out nutrient-dense foods like nut butter and fruits and vegetables.

You may also find that eating more calories early in the day like at breakfast, helps you stay full throughout the day and lessen overeating.  You could also try eating a small snack – between lunch and dinner – to help reduce the desire for late night eating.  Above all, just try some relaxing activities (at night) instead of eating like, getting out for a easy walk, reading (or listening) to a book or taking a bath.

With healthy food choices and earlier meal times, you may be able to attain greater well-being and a healthier weight.

(NaturalHealth365)  The controversy over caffeine consumption during pregnancy is a long-standing one.  END_OF_DOCUMENT_TOKEN_TO_BE_REPLACED

(NaturalHealth365)  Horsetail – a tall, shaggy weed that grows in wetlands and END_OF_DOCUMENT_TOKEN_TO_BE_REPLACED