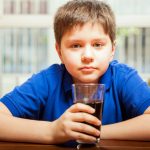 (NaturalHealth365)  We increasingly understand that different body types are a factor of being human, and curvier figures aren’t necessarily less healthy ones.  Nevertheless, science is pretty clear that childhood obesity is neither normal nor desirable.  Although children’s body compositions fluctuate as they grow, and some cultures exhibit greater fat retention than others, even in youth, the childhood obesity epidemic clearly demonstrates that this problem is getting worse.

Happily, though a difficult one, this isn’t an unsolvable health crisis.  New research shows that parents can take relatively simple steps to start combatting weight gain and obesity in children simply by making different choices for them at the grocery store.  A recent study indicates that merely placing visual warning labels on sugary canned drinks can encourage parents to select healthier options.

It’s no secret that obesity is an issue.  Across cultures, it has been shown to increase the chances of Western diseases such as diabetes, stroke, heart disease, and cancer.  Additionally, early in the pandemic, scientists concluded that it aggravated COVID-19 cases, and the same is true for other transmissible and respiratory maladies.

Today, obesity is beginning younger and younger.  Of course, that doesn’t mean we should assume that any child not fitting a prescribed body type is ill, but it does mean that doctors need to take serious steps at a young age to determine whether children are healthy.  And it means that if they discover unhealthy dietary choices at the root of unhealthy body types, parents are responsible for doing something about it.  Enter the study.

This experiment was relatively simple in design.  Parents were brought to a sample market, where they were asked to choose a drink, a snack, and a non-edible item for their child.  The latter two choices “masked” the real purpose of the study, so the parents weren’t focused specifically on the drink.  The study’s variable was the style of the beverage.  Some parents were given choices between drinks that had no warning labels, and others were asked to choose between healthy liquids without a warning label and unhealthy options that had one.

Results were clear.  Parents who saw the warning labels exhibited a 17 percent greater chance of avoiding the sugary drinks.  Applied to the population as a whole, this type of food labeling could make a considerable dent in the epidemic.

There is no simple fix to the industrial food complex, of course.  Even low-calorie sweeteners can cause damage to a healthy gut and potentially increase weight gain, so simply cutting sugar isn’t a solution.

Implementing healthier diets in schools and increasing exercise are also critical to fighting the epidemic.  And for that, we need parents on board as well.

The conclusion is clear: parents need to step up their game when it comes to feeding their children properly, but they likely won’t make much progress alone.  It’s up to legislatures and food companies across the globe to help them get there.

(NaturalHealth365)  The controversy over caffeine consumption during pregnancy is a long-standing one.  END_OF_DOCUMENT_TOKEN_TO_BE_REPLACED

(NaturalHealth365)  Every 34 seconds in the United States, somebody dies of heart END_OF_DOCUMENT_TOKEN_TO_BE_REPLACED