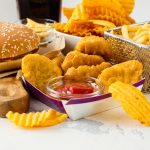 (NaturalHealth365) Today’s food contains non-food ingredients that your grandmother and great-grandmother wouldn’t have recognized as food.  In fact, according to journalist and food writer Mark Bittman in his new book Animal, Vegetable, Junk, close to 50% of the food that’s available today is in the form of ultra-processed junk food.  While there’s a well-established relationship between diet and physical health, the associations between diet and mental health remain largely a gray area – within the “conventional” world, and it’s one that’s being increasingly looked at by scientists and researchers.

Cheap food has a terrible impact on public health.  According to Bittman, as more countries switch from a traditional diet to a more American diet, rates of chronic disease go up.  In a new study published in the journal Nutrients, researchers at Binghamton and Stony Brook University insist there is also growing evidence that dietary factors affect mental health.  Key findings of the study include the associations that mental distress has with caffeine and fast food consumption.

Obesity and chronic diseases are only the tip of the iceberg: Research shows fast foods cause even MORE harm

The more fast food is consumed, the greater the risk of anxiety and depression.  It’s a dietary thesis that’s backed up by numerous observational studies.

For example, a 2019 study looking at adults over the age of 50 found a link between higher levels of anxiety and diets high in (toxic) saturated fat and added sugars.

A separate study in 2019 found that fast food was a factor in rising teen depression.  “The consumption of foods high in sodium and low in potassium may contribute to depression through multiple mechanisms, including direct effects on neurotransmitters and neural function,” the researchers concluded in the study published in Physiological Reports.

Meanwhile, according to research published in Public Health Nutrition and prepared by the University of Las Palmas de Gran Canaria and the University of Navarra, in Spain, fast food can increase the risk of falling into depression by up to 51%.

Finally, a multi-country analysis of 41 studies found that foods containing a lot of contaminated fat or sugar, or were processed, lead to “systemic inflammation,” which can lead directly to depression.

The bottom line: there’s nothing happy about those “Happy Meals.”

In the emerging field of Nutritional Psychiatry, researchers are asking one question: Does diet help prevent mental health conditions?  Yes, it does.

But part of the problem is that ultra-processed foods are cheap, fast, and widely available.  Therefore it’s easy for consumers to fall into a poor dietary pattern, one that may not only lead to chronic disease and obesity but increased anxiety and depression.

What can you do?  Eat a healthy diet characterized by high intakes of organic fruit, vegetables, whole grains, olive oil, fish, low-fat dairy, and antioxidants.

Don’t just steer clear of fast food but also avoid “fast groceries” – that 90% of the middle part of the supermarket where processed, high-calorie junk food thrives, conveniently packaged and engineered to be craveable, even though your grandmother and great-grandmother wouldn’t recognize those non-food products as food.

(NaturalHealth365)  Organic produce sales are booming around the world.  Of course, by END_OF_DOCUMENT_TOKEN_TO_BE_REPLACED

(NaturalHealth365)  How many vibrant green superfoods do you consume daily?  If it’s END_OF_DOCUMENT_TOKEN_TO_BE_REPLACED