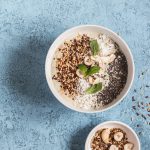 (NaturalHealth365) Are you omega-3 deficient?  According to an overwhelming abundance of scientific data – the answer (for most people) is yes.  Low omega-3 intake is directly associated with arthritis, brain disorders, hypertension plus many other cardiovascular issues.  So, how can we prevent this risk to our health?

The answer is really quite simple – stop eating too many omega-6 rich foods.  The typical ‘modern’ diet offers way too many omega-6 fatty acids – by way of conventionally produced meats and overly-processed foods – which actually inhibit the conversion of omega-3 into DHA and EPA.  In fact, the typical American diet has about 20 times more omega-6 fatty acids versus omega-3 fatty acids, and this sets the stage for disease.

How does omega-3 deficiency damage the body?

Simply put, low omega-3 intake tends to promote inflammation – the root cause of most degenerative diseases.  Think about all those bagels, potato chips, crackers, French fries, and the overabundance of processed, vegetable oils in packaged food items.  Obviously, over time, all these foods create nutritional deficiencies that damage the circulatory system and brain cells.

Most people think that a good source of omega-3 fatty acids comes from fish, dairy, and meats.  But, especially these days, one has to consider the quality of the food and its source.  When choosing animal food – look for pasture-raised (grass-fed) beef and dairy products.  Remember, the healthier the animal – the better the omega-6 to omega-3 ratio.

Bottom line: Most people eat way too many vegetable oils – high in omega-6 – and there is significant evidence that this can cause serious harm.  People who eat a non-industrialized, organic fresh foods diet have an omega-6 to omega-3 ratio of about 4:1 to 1:4 – plus a much lower risk for developing life-threatening diseases.

Is it dangerous to be a vegetarian?

Without getting into a debate, the truth is vegetarians can consume adequate amounts of essential fatty acids – in the right proportion.  Like anyone else, it just takes a little thought in making the right decision.

Not surprisingly, flaxseeds top the list in terms of the best vegetarian choices of omega-3.  In fact, just one ounce of flaxseed contains 6,388 mg of omega 3 and only 1,655 mg of omega 6.  In addition, just one tablespoon of flax oil can deliver 7,196 mg of omega 3.

Looking for more healthy choices?  Try adding some chia seed to your diet.  Often touted for its ability to improve physical strength and endurance – one ounce of chia seeds gives us 4,915 mg of omega 3 but just 1,620mg of omega 6.  Especially for diabetics, chia seeds will help to improve insulin sensitivity.

Where else can I get omega-3 rich foods?

Walnuts provide an omega-3 to omega-6 ratio of 4:1.  They are high in anti-inflammatory ALA and a very good source of manganese and copper.  Most importantly, if you’re looking to boost brain power, walnuts have been shown to improve cognitive learning and performance.

Did you know that certain microalgae produce high levels of EPA or DHA?  Microalgae, like spirulina, are microscopic single-cell plants that are found in oceans and lakes.  They are at the bottom of the food chain and the only vegan source of both EPA and DHA.

Obviously, there are many other choices – when it comes to omega-3 rich foods.  You can add wakame (seaweed) to soup or try some dark, leafy green vegetables, wild rice, berries, or cabbage foods like cauliflower.  All of these foods – naturally – provide a healthy balance of the omega-3 to omega-6 ratio.

Final thoughts:  Omega-3 deficiencies can easily be avoided by making better food choices.  Spend your money on fresh, organic foods – as often as possible – and stay away from the profit-centered, major food producers that care little about your health.

(NaturalHealth365)  The typical Western diet is loaded with sugar, and this is END_OF_DOCUMENT_TOKEN_TO_BE_REPLACED