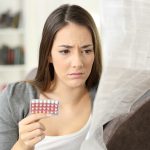 (NaturalHealth365) According to the American Cancer Society, the typical woman has a 1 in 8 chance of developing breast cancer at some point in her lifetime. Sadly, the rates of breast cancer have increased dramatically in recent decades.  Today, breast cancer remains the most common type of cancer affecting women, other than skin cancer.

Why are breast cancer rates skyrocketing – could the growing number of cancer-causing chemicals found in our environment be to blame?  Data from one new study suggests yes.

The study, published in the recent edition of Environmental Health Perspectives, used laboratory testing to identify chemicals that may cause breast cancer by elevating the synthesis of estradiol (estrogen) and progestin (synthetic progestogen), two substances linked to an increased breast cancer risk.

The researchers found that 296 chemicals demonstrated the ability to increase the activity of one or both of these hormones.  Chemicals, including hexythiazox, oxyfluorfen, pirimiphos-methyl, and 3,3′-dimethylbenzidine, were found in various sources, including “pesticides, consumer product ingredients, food additives, and drinking water contaminants.”

The researchers note that at least 53 of the chemicals tested are currently being used in consumer products, despite the fact that there is “inadequate information to assess carcinogenic potential.”

Incredibly, as many as 13% of the nearly 300 chemicals were previously identified as “unlikely” carcinogens or reproductive/developmental toxicants, despite showing cancer-causing potential in the comprehensive laboratory study.  How could such a misclassification occur?  One explanation relates to a failure of conventional toxicology testing.

Generally, toxicology testing of U.S. consumer products only looks at whether chemicals mimic estrogen or bind to hormone receptors.  But what is rarely tested is whether chemicals can actually trigger estrogen production, which is exactly what these researchers discovered.

Beyond everyday household items, common pharmaceutical products have been associated with breast cancer, too

It’s not just food, pesticides, and household products that can expose you and your loved ones to chemicals that increase the risk of cancer.  Unfortunately, many drugs and medical products have an elevated cancer risk, too.

Remember hormone replacement therapy (HRT)?  Once widely recommended by medical professionals, HRT has been strongly linked to breast cancer, as just one example. We see this especially among postmenopausal women, who are more likely to have breast cancer when they have higher blood levels of estradiol, according to the Susan G. Komen Foundation.

According to BreastCancer.org, combination HRT increases a woman’s risk of breast cancer by as much as 75 percent.

Another group of medications linked with breast cancer – oral contraceptives, according to the National Cancer Institute.  Indeed, the International Agency for Research on Cancer and World Health Organization identified combination oral contraceptives (which contain estrogen and progestin) as a Group 1 carcinogen back 2005 – putting “the pill” in the same category as arsenic, asbestos, and tobacco smoke.

Question: if you’re a female or the parent of a female, did your doctor ever explain to you the full range of risks associated with this medication?  Were you ever informed that oral contraceptives might cause cancer?

(NaturalHealth365)  The controversy over caffeine consumption during pregnancy is a long-standing one.  END_OF_DOCUMENT_TOKEN_TO_BE_REPLACED