Pump up antioxidant defense with THIS essential nutrient 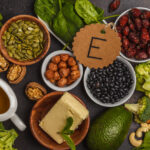 (NaturalHealth365)  Believe it or not, our bodies are constantly under attack from an invisible enemy – unstable free radicals.  These trouble-making molecules, created in response to exposure to environmental toxins, ultraviolet radiation, and cigarette smoke, can cause oxidative stress that accelerates aging and triggers diseases.  (Incidentally, free radicals can also be generated by such benign – and necessary – activities as eating and exercising).

While the body needs a certain amount of free radicals to fight disease, problems begin when free radicals outnumber the antioxidants that neutralize them.  Vitamin E, a fat-soluble antioxidant nutrient found in nuts and seeds – may help “level the playing field” by defending against free radicals and protecting the health of body systems.  A recent review shows that vitamin E may help to reduce the odds of bone fracture.  So let’s see what else this versatile vitamin can do.

The term “vitamin E” refers to a group of eight antioxidant compounds subdivided into two groups of four: tocopherols and tocotrienols.  The primary form in the body, alpha-tocopherol, is also the type most commonly used in dietary supplements.  Alpha-tocopherol, in particular, has been shown to be a potent antioxidant, protecting fats, proteins, and cell DNA from oxidative damage.

Specifically, studies have shown that it prevents the oxidation of polyunsaturated fatty acids, thereby protecting the vital fatty membrane layers of cells.  Additional studies have demonstrated that alpha-tocopherol reduces oxidative stress markers while increasing glutathione levels, the body’s master antioxidant.  By the way, scientists report that vitamin E may even help to suppress abnormal cell growth, allowing it to potentially discourage the development of cancer.

Roughly one in ten Americans over 50 have osteoporosis, a condition in which bones become brittle and prone to breakage.  Now, a new study published in the peer-reviewed journal Nutrients showed that the alpha-tocopherol form of vitamin E could play a role in reducing bone fractures, especially fractures of the hip – a particularly debilitating type of break.

The scientists noted that higher levels of circulating alpha-tocopherol were associated with greater bone mineral density, increasing it by over 10 percent – which could undoubtedly be significant in withstanding a fall.  The researchers called for more studies to explore the bone-strengthening effects of vitamin E.

Vitamin E is believed to benefit the heart by dilating blood vessels, promoting healthy circulation, supporting normal blood clotting, and inhibiting the formation of harmful LDL cholesterol.  A 2019 meta-analysis of 18 different studies published in the Journal of Human Hypertension found that vitamin E supplements helped to reduce systolic (top) blood pressure, which measures the force of each heartbeat.

In another study published in Diabetes and Metabolic Syndrome, people with metabolic syndrome – a linked cluster of unhealthy conditions that include high blood pressure, high blood sugar, and overweight – experienced reductions in LDL cholesterol and triglycerides with a combination of supplementary vitamin E and omega-3s.  While more research is needed, this essential vitamin appears to show promise in protecting the heart.

According to the Office of Dietary Supplements, the adult Recommended Dietary Allowance for vitamin E is 15 mg a day.  But experts warn that the Standard American Diet (or SAD) may provide less than this amount.  People on low-fat diets may also be at risk for ingesting insufficient vitamin E.

You can boost your dietary intake with wheat germ – the undisputed “high-ringer” – which contains over 20 mg of vitamin E per tablespoon.  Roasted sunflower seeds and almonds are next in line, providing 7.4 and 6.8 mg per ounce, respectively.

If you choose to supplement with vitamin E, check first with your integrative doctor.

As a pro tip: Some natural health experts advise a mixture of tocopherols and tocotrienols for maximum benefit.  Mixed tocopherols are more effective at preventing lipid peroxidation than alpha-tocopherol by itself.  And the tocotrienols have powerful neuroprotective and cholesterol-lowering properties.

However, alpha-tocopherol should not make up more than 25 to 30 percent of the total vitamin E content for maximum bioavailability.  Although it sounds complicated, no worries: simply look for a 4 to 1 ratio of tocotrienols to alpha-tocopherol.  Incidentally, you may also see alpha-tocopherol listed in IUs.  According to The Office of Dietary Supplements, 1 mg of alpha-tocopherol is equivalent to 1.49 IU of natural and 2.22 IU of synthetic forms.

(NaturalHealth365)  Horsetail – a tall, shaggy weed that grows in wetlands and END_OF_DOCUMENT_TOKEN_TO_BE_REPLACED