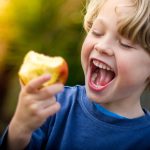 (NaturalHealth365)  According to the American Psychological Association, children today experience greater levels of anxiety compared to past generations.  Perhaps this isn’t surprising – especially now given the far-reaching challenges of the coronavirus pandemic.

And while troubling data suggests that our children have become more stressed and even more overweight since the COVID-19 crisis began, there is plenty of hopeful news in the headlines.  For example, a large study from the United Kingdom suggests that just by encouraging your kids to eat more fruits and veggies, you could have a dramatic beneficial effect on their mental health.

The study, published in September 2021 in BMJ Nutrition, Prevention & Health, looked at data from nearly 9,000 children in 50 schools throughout Norfolk County.

Initial data gathered from the cohort was a bit grim.  The researchers found that only a quarter of secondary-school kids and 28% of primary-school kids reported getting the recommended five servings per day of fruits and veg.  Some children – just under 1 in 10 – reported eating no fruits and veggies at all.

But this study also contains evidence that should be inspiring to parents.

After the researchers accounted for confounding factors like adverse childhood experiences, they determined that there was a strong link between eating a nutritious diet full of fruits and vegetables and better mental wellbeing.

In other words: kids who had better diets also reported better mental health.

Eating breakfast – instead of no breakfast or having just a snack or energy drink – was also associated with better wellbeing.

A major limiting factor of this study is that diets were self-reported by the children, which notoriously introduces a possibility of bias.  But lead researcher Ailsa Welch found their data promising enough to identify nutrition as “an important public health target for strategies to address childhood mental wellbeing.”

Do your kids stonewall fruits and veggies?  These are some of the best ways to get them to eat healthier

Most parents understand how difficult it is when a child simply will not eat what is put on their plate.  But it’s overwhelmingly likely that the foods they eat (or don’t eat) are impacting their mental health.  So, how can you get them to gobble up the good stuff?

When in doubt, start with fruits and veggies that most kids really like – including organic fruit, potatoes, and cooked carrot or squash.

(NaturalHealth365) You’ve probably heard that too much sugar harms your health.  Sugar END_OF_DOCUMENT_TOKEN_TO_BE_REPLACED

(NaturalHealth365)  Menopause is a natural part of getting older, signaling the end END_OF_DOCUMENT_TOKEN_TO_BE_REPLACED

(NaturalHealth365)  More Americans are dieting than ever before.  Almost half of Americans END_OF_DOCUMENT_TOKEN_TO_BE_REPLACED