Reduce anxiety and depression with THIS renowned Ayurvedic medicinal plant 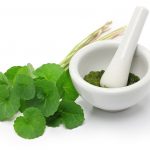 (NaturalHealth365) For many centuries, gotu kola has been a mainstay of both the Ayurvedic and Traditional Chinese Medicine (TCM) healing systems.  Botanically known as Centella asiatica – also referred to as Asiatic pennywort – this member of the parsley family has been used in TCM to treat kidney failure and malaria, and various skin conditions – including leprosy.  In Ayurveda, where it is known as brahmi, gotu kola is prescribed for similar purposes.

But, gotu kola may also have potent psychological and mental benefits, such as the power to improve cognitive abilities, reduce anxiety and enhance longevity.

Gotu kola is revered, by natural healers, as the “fountain of life”

Research has demonstrated that gotu kola’s powerful antioxidant effects can help protect brain cells from free radical-induced cell death.  As we speak, researchers are studying its potential for the treatment of Alzheimer’s disease.

In a study published in 2008 in the Journal of Ethnopharmacology, 28 healthy participants were given various amounts of gotu kola daily for two months.  Researchers found that those taking a daily amount of 750 mg experienced improvements in both areas when cognition and mood were assessed.

The team noted gotu kola’s ability to alleviate age-related decline in cognitive function and mood in the healthy elderly.  Naturally, as most researchers will do, they called for further study to explore the mechanism by which this herb works.

Researchers have long been aware that gotu kola has been used for centuries in Traditional Chinese Medicine to treat symptoms of depression and anxiety; now, medical studies confirm the herb’s effectiveness.

No less a conventional medical authority than the University of Maryland Medical Center (UMMC) cites a study in which two 500-milligram amounts of gotu kola a day significantly reduced anxiety in human volunteers over two months.  A testament to gotu kola’s sedative and calming effects is that UMMC warns against combining gotu kola with any other herbal or prescription sedatives.

In a double-blind, placebo-controlled clinical study published in 2000 in the Journal of Clinical Psychopharmacology, researchers found that a single 12-gram of gotu kola significantly reduced the startle response – a classic indicator of anxiety – 30 and 60 minutes later.  They credited it with anti-anxiety effects and called for further study to examine the herb’s application in treating anxiety syndromes.

Researchers are finding that gotu kola reduces anxiety by its action of binding to the cholecystokinin receptors.  UMMC reports that two of gotu kola’s compounds, brahmoside, and brahminoside, have sedative effects.

It’s worth mentioning that gotu kola is unrelated to the kola nut – which contains anxiety-provoking caffeine.

Here is the best way to consume gotu kola

As with any substance – an allergic reaction is possible.  Generally speaking, herbs are safe – but they are powerful substances.  If you suffer from depression or any form of anxiety – it would be best to work with an experienced herbalist.  When it comes to herbs, we all have individual needs, so it is best to educate yourself and experience the difference herbs can make in your life.