Getting rid of depression and anxiety: How to eat for better mental health 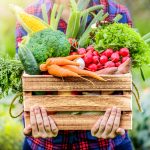 (NaturalHealth365)  The foods that you eat not only impact your waistline and your physical health, but they also affect the way you think and feel.  You’ve probably always heard that you are what you eat – and it’s true, what you put in your body matters.

But, according to a review published in the March 2021 issue of Frontiers of Nutrition, it’s what you feed your brain that really counts.

Your “second brain” is smarter than you think

Your gastrointestinal system plays an integral role in not only your physical health but in your mood and mental health as well.  This is because scientists have found that neural tissue doesn’t only exist in our brains.  It lines our gut as well.

This network of neurotransmitters does a lot more than just regulate digestion.  It is connected to the brain, and it is a key influence in diseases in the body and mental state. They’ve dubbed it out “second brain.”

The technical name for our second brain is the enteric nervous system.  While it doesn’t help with decision-making or your deep thoughts, it still has much to do.  Yes, it does regulate the digestion process and gut behavior, but it is far more complex than that.

It is estimated that 90% of the primary visceral nerve fibers transport information to the brain from the gut.  This is contrary to what was traditionally believed.

The enteric nervous system is also a producer of serotonin – to the tune of 95% of serotonin in the entire body is found in the bowels.  This is also likely why certain antidepressants like SSRIs have side effects that include gastrointestinal issues.  So, it’s no wonder that diet plays such an important part in mental wellbeing.

The foods that you choose to put into your body directly impact your second brain.  If you put junk in, it feeds the “bad” bacteria that lives in your gut.  This can lead to many health problems, including anxiety and depression.  However, your mental health often improves when you focus on nutrition and put the good stuff in.

Promoting the idea that a poor diet has a negative impact on mood is not new.  Doctors made that connection long ago.  However, now that they have linked the second brain and connected all the dots, it makes perfect sense that when you feed that brain in your gut a healthy diet, it will significantly impact your mental health.

Some foods are simply not good for you but aren’t detrimental to your health.  Then some foods directly affect your brain and gut in ways that can have lasting effects.

Nutrients and foods you should avoid include:

Zinc deficiency should also be avoided.  It can lead to depression as well as poor immunity.  Another nutrient that you need to watch out for is low B12.

Folate, B12, and B6 help keep your homocysteine levels low.  High homocysteine has been linked to an increased risk of Alzheimer’s, cognitive decline, and brain atrophy.

Foods that can strengthen your brain and gut, improving your mood and mental wellbeing, are part of a healthy diet.  Great brain and gut health diets you might try are the DASH diet and the Mediterranean diet.  Doctors and nutritionists highly recommend both.

Some of those brain-boosting foods include:

Obviously, organic quality foods are your best choice.  In addition, make sure to incorporate probiotics and prebiotics into your diet as well.

The main point is clear: maintaining a well-balanced diet is essential for a healthy body, gut, and brain.

(NaturalHealth365)  More than 4,500 published studies have created a powerful body of END_OF_DOCUMENT_TOKEN_TO_BE_REPLACED