BOMBSHELL NEW Study: Slash the risk of coronary artery disease by HALF with one SIMPLE act 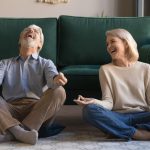 (NaturalHealth365) Despite the tragic loss of life caused by diseases such as cancer, COPD, Alzheimer’s disease and diabetes, the leading cause of death in the United States continues to be heart disease – claiming over 655,000 lives a year. And, the most common type of heart disease is coronary artery disease (CAD), caused by a buildup of plaque in the arteries that supply the heart with blood and oxygen.  Keep in mind, the risk factors for CAD include smoking; eating a poor diet; being overweight and physical inactivity, with family history playing a role as well.

Now, a bombshell (new) study published in The American Journal of Cardiology highlights a somewhat unusual hero in the battle against CAD – the ancient spiritual practice known as meditation. Let’s take a closer look at this intriguing study – and the unexpected benefits of meditation.

Seasoned researchers and scientists extol the benefits of  meditation

The study, a data analysis titled “Meditation and Cardiovascular Health in the US,” was conducted by Veterans Affairs researchers, and published in June in the peer-reviewed American Journal of Cardiology.

The team used data from the National Health Interview Survey – which involved more than 61,000 participants – and discovered that almost 6,000 reported practicing some form of meditation.  After taking into consideration a wide variety of factors – including cigarette smoking, weight, age, sex, race and marital status – the scientists came to a stunning realization.

Those who meditated were only 51 percent as likely to have CAD as those who didn’t – a very compelling statistic.  Just imagine if a pharmaceutical drug had achieved this result.  It would be headline news indeed!

And, that wasn’t all…

Important to note: the study didn’t show causality. In other words, the data did not prove that the meditation caused the lack of disease. But, the very strong association between meditation and better health speaks for itself.

Lead researcher Dr. Chayakrit Krittanawong, of Baylor College of Medicine and the Icahn School of Medicine at Mount Sinai, summed it up this way. “I believe in meditation, as it can give us a sense of calm, peace and stress reduction leading to improvement of our emotional well-being.”

How unusual – and refreshing – to hear these words from a veteran scientist.  Of course, the team noted that more study is needed to determine which types of meditation offer the most cardiovascular benefit.  Hopefully, clinical trials will soon follow.

Although the new study is certainly eye-opening, it is not the first to bring attention to the physical benefits of meditation.  Studies have shown that people under stress who meditate regularly can reduce production of an inflammatory marker known as interleukin-6.

Many scientists believe that inflammation is linked with heart disease, as well as with diabetes, cancer, autoimmune conditions and Alzheimer’s disease.  In addition, regular meditation may boost immune function.  In fact, one study showed that volunteers who did weekly meditations for 8 weeks had significantly higher levels of disease-fighting antibodies.

Thankfully, this has not gone unnoticed by medical authorities.

In 2017, the American Heart Association (AHA) issued a statement suggesting that meditation was associated with heart disease risk reduction – and advised that it be considered as an adjunct to standard risk-reduction interventions for heart disease.

An unusual study published in 2018 in Journal of Cognitive Enhancement followed 60 participants who meditated for at least 6 hours a day while attending two 90-day meditation retreats in Colorado.  Already experienced meditators, the volunteers also received instruction and guidance from a noted Buddhist scholar.

Seven years after the study, the participants who still practiced meditation continued to enjoy the benefits, and to demonstrate improved sustained attention. In addition, meditation appeared to help ward off age-related cognitive decline.  As the researchers put it: “Aging-related decrements in measures of response inhibition … were moderated by levels of continued meditation practice.”

There is even evidence supporting meditation’s ability to improve neuroplasticity, the ability of the brain to grow new neurons.

In addition, it increases production of serotonin – a neurotransmitter needed for stable mood – and stimulates the parasympathetic nervous system, which in turn helps to lower blood pressure and reduce levels of cortisol, the “stress” hormone.

Meditation has also been linked with increased psychological health, and with reduced risk of depression.  And, finally, regular meditation has been shown to reduce anxiety symptoms in those with generalized anxiety disorder.

Are you ready for a SIMPLE, 5-minute investment in your psychological and physical health?

Getting started with meditation is surprisingly simple.  Sit in a comfortable position, and focus on your own breathing, particularly the sensation and sound.

The goal is not to “banish” thought, but to non-judgmentally acknowledge thoughts and emotions as they arise – and then return your attention to breathing.

Meditation teachers generally recommend starting with five-minute intervals, which you can increase to 20 minutes a day if possible or practical.  By the way, even 20 minutes of meditation a few times a week is linked with improved resiliency to stress and lessened pain response.

While many of us blame our ever-present mobile devices for increasing stress and anxiety, they can serve as allies in the search for serenity.  Meditation apps, many of them free or low-cost, are available – and can be downloaded within seconds.

As the studies show, meditation is far more than a spacey, “New Age-y” fad.  It is a valuable technique that can promote relaxation, preserve health and potentially even prolong life. Maybe it’s time to give this soothing practice a try.