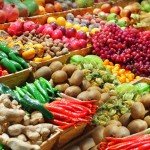 (NaturalHealth365) Organic produce sales are booming around the world. People opt for organic foods because they know it’s healthier, has more nutrients, and tastes better than produce grown with chemicals. In fact, despite the twisted (deceitful) propaganda created by the chemical industry, several recent studies prove that organic food is superior by nature.

Conventional produce is grown with toxic fertilizers, insecticides, and preservatives – which make the foods look ‘more appealing’ but, in reality, these foods are sickening.  For example, those shinny (conventional) apples have synthetic wax applied to them, doesn’t that sound yummy? With organic foods, you’ll reduce your exposure to unwanted hormones, antibiotics and contaminated sewer sludge – typically used on conventional produce.

A September 2010 study, published in the PLoS One journal, focused on the differences between conventionally and organically grown strawberries. Three different varieties of strawberries were studied over a two year period. Organic and conventional versions of these strawberry varieties were compared and it was discovered – during the random sampling of the strawberries – that organic strawberries lasted longer on the shelf, had higher antioxidant contents, and higher levels of ascorbic acid (vitamin C).

In addition, the organic strawberries tasted sweeter than the conventional ones plus the soil in which they were grown was healthier for growing additional produce. This clearly shows the benefits of organic food.

Greater scientific proof that organic foods are better for you

An October 2001 study in the Journal of the Science of Food and Agriculture looked at five different green vegetables that were grown organically. These vegetables were:

You can be sure companies like, Monsanto and DuPont, would like you to ignore these studies and continue to trust in their dangerous food production techniques – including genetically modified organisms and toxic seed creations.

Taste was better in the organic green vegetables studied, and the soil they were grown in was of better quality – just like the strawberries. This evidence, combined with anecdotal reports from the many consumers who buy and use organic foods, show that there are definite reasons to buy only organic foods. When you buy organic food, you’ll enjoy better taste and nutrition – which will ensure a healthy future for you and your family. If the cost is a concern, look to purchase locally from a farmer you can trust or grow your own.

Remember, to say the obvious, many of these chemicals – used on conventional produce – are linked to a greater risk of chronic health issues like food allergies, digestive problems and immune-related conditions. So, get started today, join a CSA (community supported agriculture); support local organic growers and/or shop at a farmers market for the best quality food you can find. The rewards are worth the effort.

(NaturalHealth365) Over five million Americans are currently living with Alzheimer’s disease. While END_OF_DOCUMENT_TOKEN_TO_BE_REPLACED