Discover how eating mixed berries can SUPERCHARGE your brain function 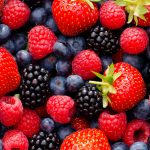 (NaturalHealth365) You probably know about the popular adage, “you are what you eat.”  Right?  Well, science continues to back that saying up … especially when it comes to your brain function.

Growing research supports the positive (and negative) effects of the foods you eat on your body, mind and spirit – in particular the brain.   That’s especially true of foods containing flavonoids, which are found in many vegetables, fruits, and other plant products.  Rich in antioxidants, they work by powerfully warding off the threat of toxins, as well as other health benefits.

Flavonoids have been shown to help protect the brain and support brain function.  In fact, new research shows that eating mixed berries, which are high in flavonoids, can help improve brain function and cognitive performance.

Researchers wanted to test findings from previous animal models and conducted research on a group of 40 healthy adults between 20 and 30 years of age. Participants were provided with a berry smoothie that included blackberries, raspberries, blueberries, and strawberries blended with water. A placebo was matched for vitamin C and carbohydrates.

They also had quicker response times!  Those who had the placebo saw a decreased performance throughout the day as cognitive fatigue set in.  Researchers concluded that consuming mixed berries, which are an excellent source of flavonoids, improve cognitive brain functions in the test subjects.

While this new study backs up the brain function benefits of mixed berries, it’s not the first study to show the benefits of a high intake of berries. A previous study published in Annals of Neurology reported that a high intake of blueberries, strawberries, and other flavonoid-rich berries delayed memory decline in aging women.

Best of all, it’s a simple dietary modification you can make to reduce memory decline and boost brain function.

Beyond improving brain function and slowing age-related memory decline, a high intake of flavonoids offers many other health benefits, too!  Additional benefits include:

How can you enjoy the benefits of flavonoids?  I’m glad you asked!

One of the best ways is to start eating more berries: blueberries, strawberries, blackberries, and raspberries.  Organic, of course. (To avoid eating unwanted chemicals in your diet.)

Toss them into your salads, slice them in cereal, top your yogurt with berries, or eat them alone as a healthy snack.