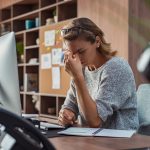 (NaturalHealth365) The fact that using your digital devices at bedtime can interfere with your sleep due to blue light emitted by light-emitting diodes (LED) screens is something we’ve known for years.  As devices become more prevalent and become a part of everyday life for many, there has been an increase in certain health issues that are often caused by device over-usage.  At the core of these problems is the LED screen due to the blue light that they emit.

Researchers are now discovering that the health ramifications associated with blue light reach far beyond sleep disturbance.  Exposure to blue light can disrupt the secretion pattern of specific hormones, upset the body’s thermoregulation, and disturb circadian rhythm.  New evidence, however, shows that it decreases fat oxidation levels during sleep.  One study found strong evidence that the type of light exposed to may influence certain physiological changes, including unwanted weight gain.

Why is blue light emitted by screens so dangerous?

Blue light is a light wave that is part of the light spectrum that the human eye can see – the visible light spectrum.  It has the highest energy and shortest wavelength, vibrating in the 380 to the 500-nanometer range.  It is most often associated with LED-lit screens for computers, smartphones, and digital devices.  However, around a third of all visible light is actually blue light.  In fact, the sun is the primary source of blue light.

The problem with blue light emissions from device screens is that the eyes are directly exposed for lengthy periods and from close proximity.  Exposure to sunlight typically does not have these issues.  Most people wear sunglasses, shield their eyes, and limit exposure.  But, of course, having the source too close to the eyes is not a problem with the sun.

Blue light does have its place, providing some health benefits – but originating from natural sources such as the sun is preferable.  However, when it comes from a screen that is mere inches from a person’s face, that can be a problem.

The eye is not very efficient when it comes to blocking blue light.  As blue light enters the eye, it passes through the lens and cornea to the retina.  Retinal cells convert the light and send impulses to the brain that turns light waves into images.  Essentially, the eye is wide open to receiving blue light, so it can be too much of a good thing when it is exposed via a device screen that is inches away.

Scientists are only now beginning to connect the dots regarding the far reach of overexposure to blue light.  It has traditionally been believed that it disrupted sleep patterns, which is true, but researchers now understand that it is only the tip of the iceberg.

So how can you protect against the harmful effects of blue light exposure? Here are 5 simple solutions for you to try

Anyone who uses a computer, tablet, smartphone, or other digital devices on a regular basis can benefit from decreasing their exposure to blue light.  Fortunately, there are several things you can do to give your eyes a break and your health a boost.

You can replace a screen or smartphone.  You can buy a new computer.  Your body and mind are much more precious — and irreplaceable.  There are so many options out there to make your screen time safer and more enjoyable.  Take some time to find the right one for you.

(NaturalHealth365)  Among all disease-related causes of death, cancer ranks number one.  Of END_OF_DOCUMENT_TOKEN_TO_BE_REPLACED