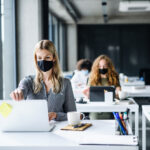 (NaturalHealth365)  Exercise your critical thinking skills, take yourself back to your pre-pandemic mindset, and you will recall a time when it was illegal to wear masks in public.  Though it was technically illegal to don a mask or bandana that conceals the face in stores, banks, and other public venues, laws were amended as the virus began to circulate.

Masks meant to ‘stop the spread of the virus’ have done anything but that.  Though few are willing to admit it, the truth is that masks that force people to inhale their carbon dioxide throughout the day are more harmful than a so-called virus itself.  Moreover, research also indicates the extensive use of masks, especially those tight to the face, might cause significant harm resulting from inhaling egregiously high amounts of carbon dioxide.

Tearing away at the fallacy of masking

It is often said that people don social masks for acceptance.  However, the era of coronavirus ushered in tangible masks that supposedly help slow or halt the spread of COVID.  Physical masks placed over the nose and mouth restrict breathing, forcing wearers to inhale their own carbon dioxide.  The inhalation of carbon dioxide at high levels is unhealthy.  In particular, doctors and scientists are sounding the alarm about the dangers presented by inhaling carbon dioxide, especially by children.

As more data rolls in, it is becoming increasingly clear that breathing one’s own carbon dioxide while seated in a classroom for 4 to 8 hours per day is hazardous to human health.  The moral of the story is that masking, be it the invisible social mask or the physical mask placed over the nose and mouth, is detrimental to physical and mental well-being.

Though authoritarians and Big Pharma executives here in the United States are eager to promote masking in all public settings, other countries aren’t as intent on establishing such rigid social control.  As an example, politicians in Germany mandate that employees who are forced to put on an N95 mask for work obtain a certificate that verifies their ability to wear such a covering.

Though there is a supposed need to wear an N95 mask, German employees who don the covering must take half-hour breaks every hour and a half.  In other words, the German government is admitting that wearing a mask throughout the workday or school day is inherently harmful to human health.

A study conducted by Germany’s University Medicine Rostock determined masks have the potential to induce harmfully elevated levels of carbon dioxide within the blood, formally referred to as hypercarbia.  Elevated carbon dioxide levels also have the potential to cause unhealthy undulations in blood pressure, a decline in arterial oxygen, and adverse effects on the metabolism.

Masking is rooted in social acceptance

Critical thinkers are quick to highlight how mask-wearing throughout the ongoing pandemic is indicative of virtue signaling as opposed to supposed concern for the greater good.  Those who wear a mask in public proudly stand on their moral high ground from which they metaphorically punch down at those below.  The mask is a symbol of conformity and supposed benevolence for others.  The face covering also symbolizes our desperate fight to eradicate a virus that has decimated our social structures and economy in less than half a decade.

Though it might appear, to some people, as though masking constitutes a meaningful action, science shows that inhaling one’s carbon dioxide is detrimental to health.  Add in the fact that masks reduce sociability in our screen-dominated social media era, and there is even more reason for society to re-ban masks in all settings but for surgical operating rooms.

The bottom line is an individual who conceals his or her face is a threat to public safety.  What sense is there in allowing nearly ubiquitous surveillance cameras if they cannot identify the facial features of a robber, looter, or burglar?  The “spirit of utilitarianism” argument touted by pro-maskers can also be used to insist that masks be re-banned in the name of public safety and promoting the greater good of the collective.

A better solution for public health issues is to promote the value of eating a healthy, organic diet and other immune-enhancing activities like, exercise!  But, in all honesty, I wouldn’t count on public “health experts” to promote healthy living, any time soon.

(NaturalHealth365)  The Wall Street Journal (WSJ), an organization that reports the news, END_OF_DOCUMENT_TOKEN_TO_BE_REPLACED