Cancer HELP: Slow down the growth of tumor cells with a “HOT” food choice 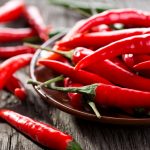 (NaturalHealth365) Did you know the heat you feel after biting into a hot chili pepper is good for you?  The compound capsaicin – that causes this pungent heat – is also found to kill cancer cells.  In fact, in the last few years, the research on chili peppers has focused on many organs including, the pancreas, brain, prostate, colon, and breast.

To date, there have been many studies on chili pepper’s ability to fight off cancer cells in many cancer-affected organs.  Among them, the 2006 study on prostate cancer cells drew more interest from researchers.  Experiments on capsaicin reveal that this compound specifically targets tumors and cancerous cells without affecting healthy cells.

Researchers found that capsaicin could do this by interfering with protein synthesis of the cancer cells, degradation of the cell DNA, and interfering with cell transcription mechanisms of cancerous cells.  While capsaicin affected the cancer cells’ mitochondrial pathway, there was no interference in the activity of healthy cells.  This was observed in cancer-induced albino rats in lab studies.

Furthermore, capsaicin decreased the expression of prostate-specific antigen (PSA) and inhibited the ability of the dihydrotestosterone to activate PSA.  When lab animals received four weeks of treatment with capsaicin, prostate cancer growth and size significantly decreased.

This spicy food choice does MORE than just prevent cancer

Compounds in chili peppers have been associated with multiple benefits like a positive immune system response, weight loss, a lower risk of diabetes, and heart-healthy effects.  In fact, a randomized, cross-over study among 27 healthy subjects revealed that consuming freshly chopped chili prevented the oxidation (free radical damage) to the fat cells – which was a crucial factor in decreasing heart problems.

Capsaicin is also anti-inflammatory in nature.  It inhibits substance P, a neuropeptide associated with inflammation that results in pain, heart diseases, and other conditions.  Because of this property, it has been used in various chemotherapy studies for pain relief and many treatments involving nerve fiber disorders, conditions like psoriasis, arthritis, and many more.

Researchers say the hotter the pepper, the higher is its capsaicin content.  Good examples include habanero and scotch bonnet peppers followed by jalapeno.

Here is how to use chili peppers in your next recipe

Chili peppers can give any bland recipe an interesting taste.  So, the next time you sauté vegetables in a stir fry, try adding some chili peppers to accentuate its health benefits as well as spice it up a bit.  Other ways to super-charge your recipes include adding minced chili peppers to plain yogurt as a salad dressing, in salsa for extra hot taste, pureeing a small amount with tomatoes or olives to give a surprising twist to your recipes.

Just be very careful when handling fresh chili peppers; direct contact with skin, lips, and eyes can cause a burning sensation.  Be sure to use cooking gloves instead of bare hands when using them for cooking.

Consuming chili peppers in moderation is considered safe, however, if you are allergic to peppers or vegetables in the nightshade family, it is a good idea to keep away from this spice.  Another important point to keep in mind is to buy organic hot peppers instead of conventionally grown ones.  According to the Environmental Working Group’s 2020 report, non-organic hot peppers are among the most toxic (pesticide sprayed) items on the market.

As a final note: please understand we are not suggesting that ‘if you eat chili peppers, you won’t get cancer cells.’  But, living an anticancer lifestyle – which includes lots of anti-inflammatory / anti-cancer foods (as long as you’re not allergic to them) can go a long way to improving the quality of your life.

(NaturalHealth365)  Chicken is the average person’s meat of choice, yet most people END_OF_DOCUMENT_TOKEN_TO_BE_REPLACED

(NaturalHealth365)  Do you remember those commercials from the 90s that asked, “Where’s END_OF_DOCUMENT_TOKEN_TO_BE_REPLACED

Protect your brain and heart: Why you should be eating MORE anthocyanins

(NaturalHealth365)  According to recent estimates, over 5.8 million Americans are currently living END_OF_DOCUMENT_TOKEN_TO_BE_REPLACED