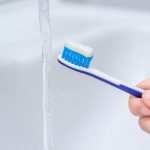 (NaturalHealth365)  Fluoride was first added to tap water in 1945 when Grand Rapids, Michigan, became the first community anywhere in the world to do it.  Initially, it seemed like a good idea.  The rate of cavities in schoolchildren dropped significantly, and the CDC touted the initiative as one of the ten greatest achievements in public health in the 20th century.

That claim is now called into question as studies show that there is no evidence that water fluoridation is effective in preventing cavities, but there are also serious health risks associated with it.

In fact, a large body of research suggests fluoride is a neurotoxin.  Studies have shown that fetal development can be harmed when the mother is exposed to fluoride during pregnancy.

Does it make sense?  Fluoride danger acknowledged in toothpaste, downplayed in drinking water

According to the CDC, almost half (40%) of children aged three to six exceed the recommended amount of toothpaste used at each brushing, and it is potentially dangerous.  Both the CDC and the American Dental Association recommend that children in that age group should use about a pea-sized amount of toothpaste, while children younger than three should only use an amount that is about the size of a grain of rice.

Those are very small amounts, and the reason for the extremely limited amounts is due to the fluoride that the toothpaste contains.

The truth is, fluoride is not all that effective in fighting cavities.  Dental caries – cavities – are caused when acids cause the teeth to demineralize.  The root of the acid formation is dietary sugars that have undergone bacterial fermentation.  In response, saliva naturally produced in the body carries another set of minerals that counter the demineralization.

Although it has long been believed that fluoride enhances the remineralization process, which, in turn, prevents cavities, the truth is that fluoride is not a substance that the body relies on for demineralization.  Furthermore, research shows that the protection provided by fluoride is not nearly as robust as government authorities have claimed.  Further studies have found many of the claims that touted the benefits of fluoride are not accurate.

Using too much fluoride on teeth can cause damage to the tooth enamel.  This condition is called dental fluorosis, and it can cause serious dental problems in children.

No matter your age, it is good to take steps to have better oral health:

Don’t buy into the false narrative of using fluoride toothpaste to have pearly white, healthy teeth.  Find a holistic or biological dentist if your dentist pushes you to submit to regular fluoride treatments.  Call your local water department and find out if fluoride is added to your drinking water.  If fluoride is present in your water, install a high-quality water filter in your home.

(NaturalHealth365)  The Wall Street Journal (WSJ), an organization that reports the news, END_OF_DOCUMENT_TOKEN_TO_BE_REPLACED