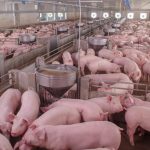 (NaturalHealth365) North Carolina’s hog industry creates over 19,000 jobs and $10 billion annually for the state.  But pigs are a dirty business.  In fact, the state’s 9.5 million hogs produce over 10 billion gallons of waste, and the giant pink pools that dot the Tar Heel landscape – waste lagoons of untreated pig feces and urine – are not only a massive problem for the environment but a serious and life-threatening public health hazard.

Industrial waste lagoons can carry a toxic stew of E. coli, salmonella, cryptosporidium, and other dangerous bacteria.  When the lagoons overflow and floodwaters become mixed with waste, bacteria can flow into the rivers and streams or contaminate groundwater, which is the main source of drinking water for over three million North Carolinians.

Instead of installing alternatives to waste lagoons or implementing safer solutions to combat waste and pollution, North Carolina’s industrial farms want to profit from hog waste under the guise of “renewable energy.”

Toxic hog waste agenda: What are they really hiding from the public?

There are roughly 4,000 pig farm waste lagoons in the state of North Carolina. Under normal conditions, these lagoons produce noxious and dangerous gases.  Studies have shown that people living near these lagoons are at a greater risk of asthma, anemia, kidney disease, high-blood pressure, eye-irritation, diarrhea, depression, and certain cancers.

Now, Smithfield Foods wants to use the state’s hog waste lagoons to capture, transport, and sell the methane they produce. The proposed project, however, is a false solution, a corporate greenwash under the guise of “renewable energy.”

The $500 million joint venture with Dominion Energy, which includes creating industrial-sized biogas to cap the waste lagoons, capture the methane, and transport it through 30 miles of pipeline to a processing plant, is just another example of corporate greed at the expense of public health and the environment.

The toxic dangers of methane capturing

Methane capturing doesn’t eliminate the health risks to nearby communities. It not only produces a host of other pollutants, but according to Ryke Longest, the co-director of the Environmental Law and Policy Clinic at Duke University, “hundreds of other air and water pollutants remain uncaptured and are emitted untreated by the lagoon and sprayfield system to the environment and the communities which surround these facilities.”

The process of methane capturing also creates excessive concentrations of ammonia, which poses a high risk to those living in the area, especially if there are severe storms or spills (14 waste lagoons flooded in 2016 when Hurricane Matthew deluged North Carolina).

At North Carolina State University researchers have found several safer waste-disposal methods, including one that converts nitrogen in waste into harmless nitrogen gas and uses another process to eliminate harmful bacteria.

So why try to capture and sell waste lagoon methane at all, especially when there are safer and less toxic solutions to North Carolina’s waste lagoon issues?  Two words: corporate greed.

What can we do to combat corporate greed and the toxic crimes of industrial farming?

Together, we can make this world a better place and – never forget – our efforts really can make a difference.

(NaturalHealth365)  The controversy over caffeine consumption during pregnancy is a long-standing one.  END_OF_DOCUMENT_TOKEN_TO_BE_REPLACED

(NaturalHealth365)  Is the COVID shot necessary for kids?  We know most people END_OF_DOCUMENT_TOKEN_TO_BE_REPLACED