BREAKING: Data on 5.6 million Medicare patients DESTROY narrative of “pandemic of the unjabbed” 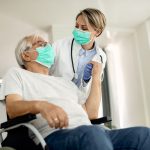 (NaturalHealth365)  Although relying on mainstream media as a source of information has proven to be a fallible idea with dire consequences, a significant portion of the population continues to believe that what they see and hear on TV is true.  Millions are under the impression that the Fauci/Biden narrative claiming we are amid a “pandemic of the unjabbed” is true and that taking the COVID shot is the only way to “get back to normal.”

According to the propaganda machine, healthcare institutions are overwhelmed by the inrush of unjabbed individuals coming down with COVID, requiring medical care, and “selfishly” taking up space in our nation’s hospitals.  But data from an AI-powered Department of Defense (DoD) program named “Project Salus” obliterates the official jab-narrative and exposes an entirely different reality.

A 17-slide analysis of the data above titled “Effectiveness of mRNA COVID-19 vaccines against the Delta variant among 5.6M Medicare beneficiaries 65 years and older” destroyed the false narrative by revealing several key findings.

For instance, the data confirmed that the effectiveness of mRNA injections wanes over time.  Not only did the injection not protect the jabbed from receiving a COVID-19 diagnosis post vax, but the likelihood of such diagnosis increased over time.  Breakthrough infection rates 5-6 months post jab were twice as high as 3-4 months after taking the shot.

Many experts point to Antibody Dependent Enhancement (ADE) as a possible explanation for the phenomenon of worsening outcomes over time.  ADE – a hyper-immune response that occurs upon exposure to a wild mutated virus – has been well documented in prior coronavirus injection studies in test animals.

Data also show that the COVID shots accelerate the pandemic, and unlike what we are told, unjabbed individuals generally have far better outcomes.  The analysis also indicates that the best strategy to avoid post-jab infections and hospitalizations is natural immunity.  Even though Fauci and mainstream media try to downplay the effectiveness of natural immunity, it turns out, those with a prior coronavirus infection do much better if contracting the virus (again) at a later date.

One must ask the question:  if natural immunity works, which it clearly does, then why take the jab in the first place?

Injecting as many elderly as possible has been one of the top priorities of the jab agenda.  As a result, government agencies have used various tactics to scare people 65 and over to take the jab.  Take a look at the CDC website and judge it for yourself:

Reading these words can be genuinely frightening.  It is no wonder why so many elderly have chosen to take the jab to feel protected.  But are they really protected?

According to the DoD data, the injection offers far less protection to older Americans than most think.  Moreover, it appears that jab protection against breakthrough hospitalizations among the 65 and older declines by age.  For example, data show that an 85-year-old person is more likely to get hospitalized with a breakthrough infection than a 65 or 75-year-old.

Isn’t this the opposite of what one would expect from the injection?  Isn’t the jab supposed to reduce hospitalization among the most vulnerable?

The analysis reveals that these jabs do not affect everyone the same way.  For example, native Americans are hit particularly hard, yet no one pays attention to the disparities.

According to the analyzed data, Native Americans have roughly 50 percent higher chances of landing in the hospital after taking the jab than other minority groups.  In addition, those of Hispanic descent face a 40 percent increased risk of post-jab hospitalization, while Blacks have a 25 percent higher risk than Whites.

The call to action to get jabbed is the same for everyone, yet what appears to be antibody-dependent enhancement (ADE) disproportionately affects certain racial groups.

Is ADE claiming the lives of the vaxxed?

The DoD data confirm what many already suspected – the reality is vastly different from the official narrative and the picture that mainstream media tries to paint.  Surging rates of deaths and hospitalizations occur not among the unjabbed but those fully vaxxed.

More importantly, people who have taken the jab experience worsening outcomes over time.  This finding is particularly concerning, and many experts believe it is due to ADE (Antibody Dependent Enhancement).

Are you concerned with the pandemic of the jabbed?  Tell us what you think.

(NaturalHealth365)  If you avoided the jab – or at this point, the END_OF_DOCUMENT_TOKEN_TO_BE_REPLACED

(NaturalHealth365)  Has the world moved one step closer to the “Great Reset?” END_OF_DOCUMENT_TOKEN_TO_BE_REPLACED