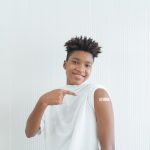 (NaturalHealth365)  On September 9th, President Biden called for (among many other things) mass injection of all children aged 12 and up.  Meanwhile, the Los Angeles public school system recently made headlines by stating that the COVID shot will be a school requirement for all its 12-and-older students – and it’s likely many other public school systems will follow suit.

But new data suggests that a key demographic target of these jab mandates – young boys – face a greater risk of harm from the shot than from the actual COVID-19 disease.

New study suggests that for this group of young people, getting a COVID shot is riskier to health than actually contracting COVID-19

A yet-to-be peer-reviewed study published on September 8, 2021, on MedRxiv combed through data from the Vaccine Adverse Event Reporting System (VAERS) between January 1, 2021, and June 18, 2021.  The researchers specifically looked at adverse events reported for adolescents ages 12-17 who received either the Pfizer or Moderna mRNA jab.

The findings were sobering:

For boys aged 12 to 17 without any pre-existing health conditions, the chances of experiencing a cardiac adverse event such as heart inflammation post-jab were GREATER than their chances of being hospitalized with COVID-19.  Post-injection cardiac adverse events were reported most often among young boys aged 12-15 following their second mRNA dose.

As of now, the chances of post-jab heart inflammation still appear relatively low – for boys aged 12-15, for example, the risk is 162.2 per million, based on the study’s data.  However, it should be reiterated that there is notorious under-reporting to VAERS.

Understandably, the researchers conclude: “Further research into the severity and long-term sequelae of post-vaccination [cardiac adverse events] is warranted.”

PAY ATTENTION:  Officials increasingly refer to past jab mandates in an attempt to make COVID shot mandates seem like not a big deal

In August 2020, Massachusetts officials tried to make the flu shot mandatory for all students in the state.  After intense public protests, the Massachusetts Department of Public Health put their tail between their legs and unceremoniously shelved the mandate, claiming that DPH “wants to alleviate the burden to obtain flu vaccination and focus on continuing our COVID-19 vaccination efforts” rather than admitting that their idea was met with profound backlash.

But was this a short-lived victory?

After all, universities, as well as public school systems like Los Angeles County, now require COVID-19 vaccinations for their students and faculty.  What’s to stop them from requiring even more shots in the future – including an annual flu jab and an unknown number of COVID-19 boosters?

Notably, these institutions, along with their supporters, readily dismiss opposition by stating that the precedent for jab mandates has long been set. President Biden said as much in his September 9th speech, when he stated:  “The safest thing for your child 12 and older is to get them vaccinated.  They get vaccinated for a lot of things.  That’s it.”

But the dismissive idea that “mandates exist for other jabs, too, so it’s no different for COVID-19” is just the latest flair of propaganda, medical freedom advocates say.  (Another piece of propaganda making the news circuits lately: that not getting vaxxed is equivalent to driving drunk!)

The truth is, COVID shots are still being investigated for their safety and efficacy.  There is still so much to learn about the known – and unknown – harms of the COVID injection, especially for certain age groups, as just discussed.  You might have even heard that the National Institutes of Health just awarded over $1.6 million dollars to five institutions to explore “potential links between COVID-19 vaccination and menstrual changes.”

Plus, the entire pandemic has raised some important questions: are medical mandates ethical?  Is it morally acceptable to make medical products mandatory for members of a free society?  Does the government or your employer really have the right to tell you what to inject into your body, under threat of force, termination, loss of property, or some other punishment?  And just because something has “always been that way,” does that necessarily mean it’s right?

(NaturalHealth365)  As Big Pharma rolls out one COVID booster after another, a END_OF_DOCUMENT_TOKEN_TO_BE_REPLACED