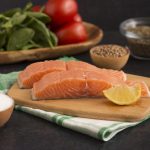 (NaturalHealth365)  When you think of clean eating, chances are salmon immediately springs to mind.  It is the poster child of brain-friendly, heart-healthy fare, advertised on cooking shows and in medical journals as a panacea for the ills of the modern age.  And yet, not all salmon are created equal.

Farmed salmon has gained an unfair advantage when it comes to its reputation, simply by dint of being related to its wild ancestor.  New studies show, however, that not only is that advantage unearned, but it may also actually be prompting us to make terrible health choices.  Because it turns out, farmed salmon is worse than junk food.

Salmon farms: Rife with health concerns for humans and fish

As nicely summarized by The Defender, linked above, aggregated studies have some pretty terrible news to share about farmed salmon.  These include the facts that:

Here is why farmed salmon is NOT a health food

The above study found that farmed salmon is among the most toxic foods on the planet.  So rather than the health food it is proposed to be, it has more in common with junk food.

Why?  Because fish are fed pellets that have more in common with low-grade pet kibble than with their natural food source.  Close proximity to one another also means fish get diseases and attract parasites at higher rates, so they must be “protected” with antibiotics and pesticides.

Many farms are located in naturally polluted waters, such as the mouths of dirty rivers.  Where these empty out, the oceans receive massive loads of garbage, human waste, and algae blooms.  Moreover, farmed salmon is often passed off as its superior cousin, wild salmon.  This happens in restaurants, cheating the consumer and depriving career fishermen of valuable income.

So if you wouldn’t feed your family McDonald’s, saying no to farmed salmon should be a no-brainer.  It is not how we should spend our money as conscientious consumers.

Let’s not throw the baby out with the bathwater, though.  While the farmed variety should immediately go on your blacklist, wild salmon is still excellent for your health.  It contains large amounts of Omega-3 fatty acids, which are great for the brain and help keep your body in balance with the less-great Omega-6 variety.  It is also a good source of protein, B vitamins, and important micronutrients such as potassium, selenium, and astaxanthin.

The only thing you need to do?  It’s actually pretty simple: buy the wild variety.  It’s better for your body, for our food systems, for fishermen, and for the world, so make the switch today.

(NaturalHealth365) You’ve probably heard that too much sugar harms your health.  Sugar END_OF_DOCUMENT_TOKEN_TO_BE_REPLACED

(NaturalHealth365)  Menopause is a natural part of getting older, signaling the end END_OF_DOCUMENT_TOKEN_TO_BE_REPLACED