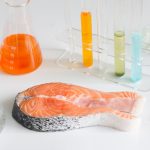 (NaturalHealth365) According to the Food and Agriculture Organization of the United Nations, global fish consumption jumped 122% from 1990 to 2018.  But, the alarming news is: about 50% of the fish eaten worldwide is now farm-raised.  And, while fish is viewed as a “healthier alternative” to red meat, lower in saturated fat and an excellent source of protein, omega-3s, vitamin B12, vitamin D, potassium and iron … industrial farmed – or I should say – toxic salmon is no better than junk food.

You see, industrial-scale ocean fish farms, or factory farms, rely on a toxic cocktail of pharmaceutical drugs, pesticides, and genetically engineered crops such as soy.  In addition, factory farms – which are a big business in Norway, Iceland, Canada, and Scotland – often have pens large enough for 200,000 fish and bring pollution, waste, plagues of sea lice, and threaten the future of wild salmon.

The fish farming industry is set to double in the next 15 years. This isn’t good news for human health or the environment.  Farmed salmon are raised on an unnatural diet of processed, high-fat, high-protein feed, a cocktail that can include everything from PCBs and dioxins to antibiotics and pesticides.

A 2003 report from the Environmental Working Group (EG) found that seven out of ten farmed salmon purchased at grocery stores in San Francisco, Washington DC, and Portland were contaminated with cancer-causing polychlorinated biphenyl (PCBs) at levels that raise health concerns. In addition, a 2004 study found that farmed salmon, on average, have PCB concentrations that are eight times higher than in wild salmon.

And let’s not forget: Wild salmon get their color from eating krill and shrimp. The flesh of farmed salmon is gray, and is colored by astaxanthin, a manufactured copy of the pigment that wild salmon eat in nature.

The common salmon lice – Lepeophtheius salmonis – kills millions of farmed fish each year. They cause skin lesions and infections in millions more. The lice problem is growing and it’s proven to be more resistant than the fish farming industry imagined.

Why is it growing? Because pens that hold 200,000 fish produce large amounts of waste, especially considering that big farms have 8-10 pens.  These farms are toxic toilets that spawn lice and destructively impact marine diversity and the ocean floor.

Alice Walker famously said, “Activism is my rent for living on the planet.” It’s something to think about next you want salmon for dinner.  If 50% of the fish eaten worldwide is now farm raised, finding wild caught salmon is increasing difficult.

What can you do to avoid toxic salmon:

Editor’s note: My favorite source of wild fish is VitalChoice.com … and, no, I do not receive any financial incentive for telling you this.  I just thought you might be interested.

(NaturalHealth365)  The telecommunications industry has rolled out 5G connectivity quite inconspicuously.  The END_OF_DOCUMENT_TOKEN_TO_BE_REPLACED