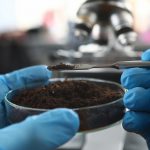 (NaturalHealth365) PFAS, also known as “forever chemicals,” are a family of approximately 5,000 man-made chemicals that have been linked to a range of health problems, including reproductive and developmental issues, as well as cancer.  This class of industrial chemicals has become a hot-button issue on Capitol Hill, but regulations or efforts to oversee chemical companies and track their compounds has proven difficult, to say the least.  Plus, to make matters even worse, the general public remains in the dark about this topic.

In truth, these highly toxic substances – being produced by chemical companies like, 3M and DuPont – are largely unchallenged to this day by government regulators.  And, the system does not show any sign of changing the rules in the near future.

According to federal and state researchers, a “new,” potentially dangerous forever chemical has been detected in multiple soil samples in New Jersey. The compound is a “form” of PFAS, and it illustrates how easy it is for manufacturers to phase out a PFAS substance once it’s been regulated and replace that substance with a newer, related, but unregulated compound.

The new “forever chemicals” tainting the environment in New Jersey have been linked to Solvay Specialty Polymers USA, a division of the Belgian chemical giant Solvay SA.  Solvay is no stranger to controversy, having been cited by the New Jersey DEP in the past for contamination of soil and water with a now-regulated PFAS.

In 2010, the New Jersey DEP detected a PFAS (PFNA) in a public water supply near the Solvay plant. PFNA has been linked to immune system and liver problems.  The state alleges that Solvay was discharging large amounts of PFNA into the environment as early as 1991.

Here’s the thing: PFAS are not regulated as a group.  In fact, new compounds are not subject to the same regulations as previously identified ones, and therefore it will take years for the risk and danger of Solvay’s new chemical substitute to be fully assessed.

“We don’t want to continue on this toxic treadmill,” says Erik Olson, the senior director at the Natural Resources Defense Council, an environmental organization, “where one PFAS chemical is phased out only to be replaced by one of literally thousands others that have similar chemical structures.”

Only regulators and industry have true insight into the potential risks of forever chemicals, and despite repeated calls for transparency, relevant information is rarely publicly disclosed. Companies guard “trade secrets” at all costs and BIG government is continually silencing whistleblowers, fearing a web of scandal and conspiracy.

As a consumer, the best thing you can do to safeguard against PFAS is to have the drinking water in your home tested and consider installing a good quality water purification system.  In addition, choose and use products carefully and avoid products that are known to contain PFAS compounds, including stain-resistant fabrics, food delivery boxes, microwave popcorn bags, and non-stick cooking pans.

As chemical companies exploit regulations and replace old PFAS with newer, related compounds, protecting yourself against potential toxins will be more challenging.

The bottom line: Stay informed. And be sure to listen to this enlightening NaturalHealth365 Podcast with Jonathan Landsman and environmental attorney, Robert Bilott.

(NaturalHealth365)  The denial and gaslighting were strong from mainstream media, government officials, END_OF_DOCUMENT_TOKEN_TO_BE_REPLACED