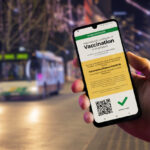 (NaturalHealth365)  The heads of the Group of 20 (G20) are pushing for a worldwide vax passport.  If the cabal’s push for proof of the clot shot becomes necessary for participation in the labor force and society, life as we know it will come to an end.

Use your mind’s eye to imagine a future in which you must present proof of your vax status to get on a train, get a job and interact with others.  The worst-case scenario is modern-day China, where residents are forced to scan QR codes with their smartphones to pass through public vax/health status checkpoints.

The dystopian agenda is no longer hidden

The 1980s flick Early Warning was exactly as it sounds: a harbinger of our 1984-like future.  Our current reality is eerily imitating Orwell’s fiction.  The rapid evolution of technology combined with our collective societal moral regression is quickly creating a progress paradox.  The ironic part of our slide into a full-blown dystopia is the fact that the global cabal engineering social chaos isn’t even attempting to conceal it.

Leaders of the G20 are making no secret of the fact that they are ushering in a new world order in which every citizen will require a worldwide vax passport.  Leaked information publicized by Drastic Research indicates that Wuhan-based scientists insisted on experimenting with bat viruses several years before the coronavirus outbreak.  In other words, the powers that be clandestinely planned to wreak havoc on the global economy, setting the stage for totalitarian control in the form of a global vax passport.

If the G20 cabal has its way, its joint declaration pushing for a worldwide digital health network that expands on current coronavirus vax passports will soon be a reality.  It might not be long until the era of pandemics and global warming ushers in a One World Government that operates in cahoots with Big Pharma and Big Tech to exert total control over hardworking people.

If a global digital health network is implemented, the general public will be forced to show proof of injection for travel, labor, and social participation.  The cabal will frame the global vax passport as a solution to address the ever-growing string of public health crises, ultimately eradicating civil liberties in favor of the supposed greater good of society.  In reality, the push for a global vax passport is nothing more than a latent attempt to exert authoritarian control over the masses, ultimately limiting their personal agency and forcing them to become fully dependent on a pseudo-totalitarian dictatorship.

“Papers, please”: Are we heading towards a social credit system?

Imagine a dark new era in which government agents require proof of injection to traverse public highways, enter shopping malls, cross the border, and otherwise engage in social relations outside of one’s local community.  Such a dystopian scenario is reminiscent of Nazi Germany’s requirement to present one’s papers to pass through public checkpoints.

Read through the leaked G20 documents, and you’ll find the cabal is even going as far as pushing for a centralized digital currency.  If a digital currency is mandated, tangible dollars will cease to exist, ultimately creating a nightmare scenario in which the global cabal monitors spending at the individual level, ultimately paving a path toward a digital social credit system in which authoritarians dictate participation in the global economy.

It is up to us to prevent a dystopian future in which digital health certificates and digital currency are used as tools of totalitarian control.  The path to a better future starts with becoming politically active, teaching our kids to resist authoritarian control, and protecting individual liberties.  As free thinkers often say, it is better to die on our feet than to live on our knees.

(NaturalHealth365)  Is the COVID shot necessary for kids?  We know most people END_OF_DOCUMENT_TOKEN_TO_BE_REPLACED

(NaturalHealth365)  As Big Pharma rolls out one COVID booster after another, a END_OF_DOCUMENT_TOKEN_TO_BE_REPLACED