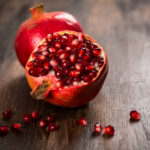 (NaturalHealth365)  The list of advantages of consuming foods rich in antioxidants continues to grow.  But scientists have evidence that one of these antioxidant-rich foods – pomegranate – may reduce the risk of cancer and cardiovascular disease and reverse plaque buildup in the arterial walls.

This is critical news not only for consumers but for scientists whose previous study findings suggested that antioxidants could only reduce plaque buildup, not actually reverse the damage.

Results of an Israeli study show that pomegranate very likely reduces existing plaque buildup in the arteries and doesn’t just slow its development.

Israeli scientists studied patients known to exhibit narrowing of their carotid arteries due to atherosclerosis.  The research focused on the carotid artery, found in the neck because it is behind approximately 80 percent of the body’s blood flow to the brain.

Blood analysis on the group receiving the pomegranate juice showed an increase in antioxidant activity of 130 percent compared with levels before the study’s start.  These patients also saw an average drop in systolic blood pressure of 21 percent following one year of the fruit’s juice consumption.

Pomegranate also safeguards low-density lipoprotein from harmful oxidation and has been shown to lower blood pressure.  The researchers concluded that supplementing with just 2 ounces of pomegranate juice every day reduced blood pressure because the activity of the angiotensin-converting enzyme was reduced.

By the way, many medications used to treat high blood pressure work in much the same way, raising the strong possibility that supplementing a diet with pomegranate juice consistently could help patients maintain healthy blood pressure levels.

Could this fruit help prevent cancer?

In addition to its remarkable ability to protect your heart, pomegranate also appears to combat several of the more common forms of cancer, including prostate cancer.  It works by hampering the progression of cancer cells due to ellagitannins – the very substances that give the fruit its color.

As you can see, pomegranate contains multiple compounds that help prevent cancer and support a healthy heart.  So whether you eat the whole fruit, drink pomegranate juice, or take pomegranate extract in supplement form, you have various ways to tap into its many health benefits.

(NaturalHealth365)  The controversy over caffeine consumption during pregnancy is a long-standing one.  END_OF_DOCUMENT_TOKEN_TO_BE_REPLACED