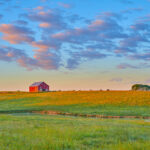 (NaturalHealth365)  Do you remember those commercials from the 90s that asked, “Where’s the beef?”  It has been a few decades since those commercials aired on living room TVs, yet the same question still begs.  It appears as though Bill Gates has emerged with the answer.

While Bill Gates was busy scooping up farmland throughout the United States in an attempt to establish control over the country’s food industry, the Netherlands’ government decided to put farmers out of business by forcing them to reduce the size of livestock herds by nearly one-third to adhere to the European Union’s rules about ammonia and nitrogen.  Are these events independent of one another or part of the same nefarious agenda?

Globalist agenda to enslave and destroy humanity is underway

The globalists have laid their cards on the table for the world to see.  Their goal is to eliminate access to as much real food as possible and substitute natural foods with synthetic food-like substances.  By making the world’s population totally dependent on them for survival, controlling the masses becomes much easier.

Whether it is through imposing destructive, anti-human regulations on farmers or allowing wealthy individuals such as Bill Gates to purchase farmland, the endgame is the same.  The entirety of the population will be subjected to the whims of the few who control the food supplies.

Add in the fact that Gates is buying farmland throughout the country, and there is even more reason to be concerned about the consolidation of money, power, and what some consider to be a dwindling food supply cramped by supply chain issues stemming from a pandemic with no end in sight.

Leasing farmland to others is not the answer

All in all, Gates owns nearly 300,000 acres of farmland.  Even if Gates follows through on his intention to lease land to farmers, he will benefit from the surplus value generated by those farmers’ labor and financial investment.

The bottom line is that control-obsessed narcissists like Gates should be viewed in the same light as vulturous corporations who swoop in when prices are low or when markets are hot to lord over others, ultimately creating a net societal negative.

The growing pushback against the corporatization of food

It is time to end the public’s reliance on a small number of wealthy individuals and corporations for sustenance.  Bill Gates is corporate America’s personification and symbol of everything wrong with the food industry.  Gates’ oligopolistic business practices siphon value away from hardworking farmers.

It is time to bust the Gates farmland trust, encourage a competitive market, and push for the common good as opposed to the myopic self-interest of a man-monster such as Gates.  Ideally, a cap would be on the percentage of farmland one person or corporation could own.  However, even a minor victory will suffice for the time being.  What matters is that awareness of a potential food crisis is heightened and that the wheels of change be set in motion.

(NaturalHealth365)  The Wall Street Journal (WSJ), an organization that reports the news, END_OF_DOCUMENT_TOKEN_TO_BE_REPLACED