Studies confirm, harm from GMO foods is real – here is how to avoid them 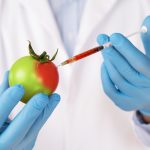 (NaturalHealth365) When the concept of genetically modified foods was first discussed, the intent was positive.  Because, according to some scientists, GMO technology was supposed to help farmers grow more food to “feed the world” and we were told that genetically manipulated food was the same as their natural counterparts.  Ultimately, many people bought into the notion that this “new way” of growing food would help end the worldwide hunger crisis.

Yet, once GMOs began to be produced and studied, certain things came to light that offered proof that they may not live up to the image created for them.  In fact, evidence clearly showed that consuming genetically modified foods increased the risk of digestive problems like, leaky gut syndrome.

What are GMOs, anyway?

According to conventional “wisdom,” genetically modified organisms, or GMOs, are created with the same genetic structure as their natural counterparts.  Because they are genetically identical in every way.  Yet, researchers like, Stephanie Seneff, PhD would warn you not to be fooled by such naive assumptions.

In addition, Big agriculture-controlled food researchers, would like you to believe that GMO foods contain the same vitamins, minerals, and proteins as the natural foods they are designed after.  Sadly, some of the world’s largest chemical companies have convinced too many farmers that GMO seeds are designed to grow food much faster and produce more viable foods for harvest.

On the surface, it sounds wonderful, doesn’t it?  Well, there is much more to this food story than most people ever hear.

Are GMO and non-GMO foods really the same?

The fact is: the human body is not able to tolerate them as well as their natural counterparts.  This (alone) defeats the value of consuming GMO foods.

In fact, some studies show that consuming GMOs – as a primary food source – may inhibit your ability to absorb nutrition from the foods you eat or benefit from certain types of medications.  In other words, over time, the more you eat GMO foods, the greater your risk of nutritional deficiencies.

In studies performed on animals, GMOs actually seemed to increase the risk of potentially harmful diseases.  In fact, these findings are so disturbing that many countries across the globe have banned GMOs from being introduced into their countries.

One of the biggest problems with GMOs is that the FDA allows food manufacturers to avoid labeling certain foods as GMO-based.  So, how is the average consumer ever going to know the true nature of the food they buy?!  No doubt, “informed consent” is not a top priority for government “health” agencies.

With those labeling restrictions lifted, it is difficult to determine what foods contain GMO ingredients and which ones do not.  We need to demand more from our elected officials to change this reality.

GMOs are continually introduced in more and more commercial (processed) foods.  How can you tell which foods contain GMOs?  Sadly, that can be a difficult task – for many uninformed consumers – since the FDA has relaxed the standards applied to food labeling laws.  But, there’s still hope. (keep reading)

If you want to avoid GMOs in your diet, you can start by shopping locally.  Go to your local farmer’s market and look for organic farmers that are dedicated to using non-GMO seeds to grow their food.  Just ask them, I’m sure they will be happy to tell you.  (If not, don’t buy from them.)

Better yet, start a small organic garden of your own.  If you live in areas where it’s easier to buy from a supermarket, purchase the brands you trust, especially those labeled 100% USDA organic.  This will greatly improve your health, as you avoid toxic foods that can destroy your digestive health and immune function.

The debate over GMOs is sure to continue.  But, as more and more studies are performed, it will become clearer what issues may arise from the use of GMOs.  Don’t wait for conventional science to catch up with common sense.

Use your purchasing power to buy only organic (non-GMO) foods and ensure a healthier lifestyle for years to come.  The rewards are worth the effort.

(NaturalHealth365)  The controversy over caffeine consumption during pregnancy is a long-standing one.  END_OF_DOCUMENT_TOKEN_TO_BE_REPLACED

(NaturalHealth365) You’ve probably heard that too much sugar harms your health.  Sugar END_OF_DOCUMENT_TOKEN_TO_BE_REPLACED